Guess who went to the movies

The ‘world’s heaviest teen’ is experiencing a new life 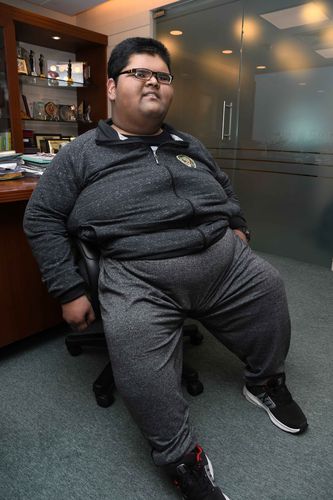 Mihir Jain, 15, can now go to the toilet on his own. A few months ago, he watched his first film in a cinema hall, and has seen several since. He has a wardrobe full of T-shirts and can breathe without machines. “But the best part is that I can walk,” he says with a smile.

A year ago, Mihir could not walk, needed help in the toilet, could not fit into a cinema hall seat, could not breathe easy and could not find clothes that fit him. At five feet, Mihir weighed more than 237kg.

Mihir's doctors say this boy from Uttam Nagar, west Delhi, was the ‘world’s heaviest teen’ before his surgery. They also claim that Mihir is the only teen in this range of weight to have had a gastric bypass.

Even weighing him was a task—he could not stand on the weighing machine. “He weighed 237 to 247kg when he came to the hospital,” says a doctor at Delhi's Max Super Speciality Hospital, where Mihir went under the knife last year.

He was brought to the hospital on a wheelchair. “Inside his body, there was a metabolic storm,” says Dr Pradeep Chowbey, chairman, Max Institute of Minimal Access, Metabolic and Bariatric Surgery, Max Hospital, Saket, who performed the gastric bypass in April, 2018. “With a body mass index of 92, there was not much hope [normal BMI would be in the range of 19-23.5]. To complicate matters, Mihir had diabetes, too. For us, Mihir was a high-risk patient, with or without surgery. It was not a matter of years, months or even weeks. We could have lost him any day.”

Four months before the bypass, doctors put him on a very low-calorie diet (VLCD) to make him lose about 40kg. “The VLCD powder is a such a tasty thing, even better than a chocolate shake. And it would keep me full for several hours,” says Mihir.

Despite the kilos he lost, Mihir remained a high-risk patient. “The decision for administering anaesthesia before a surgery is made on the basis of units per kilogram of body weight. For my weight, there was no category,” says Mihir.

The fault lay in Mihir’s genes, wrong food habits and lack of physical activity, says Chowbey. By seven, Mihir had stopped going to school because he could barely walk. Confined to his three-storeyed house—where he lives with his parents, sister, uncle Rakesh and his family—Mihir needed constant help. He needed support via a BiPAP (Bilevel Positive Airway Pressure) machine that helps to deliver the prescribed pressure of oxygen into the lungs, thus keeping the airways open. Finding clothes of Mihir's size, too, was an issue; the teenager had to make do with tailored loose kurtas and trousers.

Over the years, Mihir lost friends, but did not lose touch with the world. A personal computer and an internet connection helped him follow his passion of online gaming. “He would find these high-end toys on the net, and I would go looking for them everywhere,” says Rakesh.

Now 13 months after the surgery, Mihir has shrunk to 135kg. He says he never liked school: “Too much theory, and no practical knowledge.” Now, Mihir wants to do a course on coding. “That will fuel my ambitions to settle down in Manhattan,” he says.

His doctor agrees. “Probably that is the best option. In the US, there is more acceptance and opportunity for someone like him. Here, there is still a lot of stigma around issues concerning weight and body shape,” says Chowbey.