Banks are the ultimate custodians of people’s trust. They keep the savings of the common man and provide some returns on his savings by lending it to those who can utilise the funds for a commercial venture. It is expected, in this tripartite arrangement, that the borrower will borrow for an enterprise that will provide him the returns so that he can service the loan he took from the bank. It is expected of the bank to ensure that it properly appraises and then approves the borrower’s proposal, making sure that the venture would be able to earn enough to service the loan. On the other hand, the borrower should be a credible entrepreneur. For this tripartite arrangement to function effectively, the sincerity of all concerned should be unimpeachable.

So, what is the responsibility of each? The bank should have the capability to do proper credit appraisal. It should put in place adequate risk-management systems to ensure that it is not putting public money at risk. It should have an IT architecture in place for stringent monitoring. It has to ensure that the lent funds are never at risk, and has to closely monitor this at different levels in the bank every month and every quarter. There is then the internal control system, followed by the audit by the statutory auditor, who is well selected and competent. Beyond that is the audit committee of the bank’s board of directors. Then there is the final supervision by the board of directors. Above all, there is the annual inspection and audit done by the regulator, which is the Reserve Bank of India. The IT architecture is so devised that there are multi-layer checks in the bank and the Central bank.

With all these precautions in place, there is no possibility of any default, wilful or otherwise, without the agency concerned getting a signal. So, how did the latest Punjab National Bank default take place, and who is at fault?

It needs to be recognised that the best systems are bound to fail if the man operating them has an ulterior motive. There was collusion at the operator or branch level, and there was extreme laxity/malfeasance at the bank’s supervisory level. The most surprising aspect is that the internal control and external auditors did not blow a whistle when they saw the default building up. Or, were they also complicit in the “ever-greening” of the account? (Covering the defaulted portion with an additional loan). Did the audit committee also ignore the warning signal? Ultimately, the board, with members representing the majority shareholder (government) and regulator (RBI), did not seem to have exercised its fiduciary responsibility and, thus, miserably failed the depositor, whose money it holds in trust. 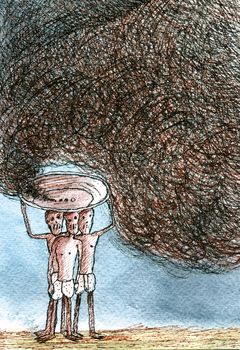 The bank management is to blame, definitely. However, when it is a public sector bank, the depositor sees the government as the owner and trusts it more. He is let down on that score, too. But, the ultimate responsibility is of the regulator, which puts in place a hundred routine compliance instructions, allows the biggest of defaults to slip through its fingers, and penalises the poor farmer who, not having recourse to dual citizenship and resources stowed abroad, faces a cul-de-sac, leading to his suicide.

When will the system be fair to the common man who borrows in the thousands, or maybe at most a few lakhs, for which he fills myriad forms, mortgages every asset and provides collateral of every kind? Who will provide him justice? When will the system treat big and small borrowers equally and penalise defaults equitably? Banking, and public sector banks in particular, have to undergo a reality check.

Former comptroller and auditor general, Rai is head of the Banks Board Bureau and BCCI’s Committee of Administrators.