There is an undeniable perverse pleasure in witnessing the mighty fall. A highbrow variety of that pleasure can be seen in the canonisation of Greek Tragedy as one of the most classic forms of storytelling. A more vulgar variety of the same pleasure was witnessed in the aftermath of Bollywood actor Sushant Singh Rajput’s tragic suicide in June 2020, when mainstream electronic media participated in a hysterical takedown and vilification of Bollywood actor Rhea Chakraborty.

Since then the Bring-Down-Bollywood brigade has turned into an industry unto itself—a raucous cyber-trolling movement consisting mostly of Hindu right-wing Twitter verified nobodies and their unverifiable followers. This gang specialises in spreading fake rumours about Bollywood stars and their alleged jihadi and mafia connections. They accuse Bollywood of nepotism, anti-Hindu propaganda, love jihad and encouraging Urdu. They give Bollywood juvenile but damaging names like Urduwood, Jihadwood and Dawood-wood. And before the release of any film that stars big Bollywood stars, especially a liberal, secular, Muslim or married-to-Muslim star, this gang begins boycott hashtags and starts creating negative ‘buzz’ around the film. Showbiz, like politics, is a perception-sensitive business and in a post-Covid world where theatre businesses have suffered such campaigns are damaging. 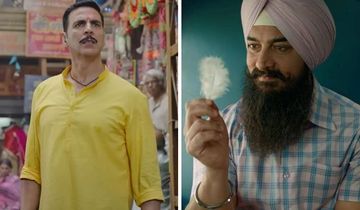 Two big-ticket Bollywood films that released in early August felt the brunt of such campaigns—Raksha Bandhan and Laal Singh Chaddha. While industry insiders will tell you that the boycott campaigns did not cause the box-office disasters, popular perception has deemed the flops of these two superstar-led films as a great victory for the Bring-Down-Bollywood brigade and the beginning of the end of Bollywood. Sure, there are many patterns that are problematic in the way films are cast and made. Yes, the #metoo allegations within Bollywood were probably true. There is an undeniable sordid side to showbiz but this is not specific. Power hierarchies and abuse of power is a universal phenomenon. So, why target only Bollywood?

The fact is the problem that the Hindu right wing has with Bollywood has nothing to do with abuse of power. They hate Bollywood because, for the larger part of its history, Bollywood has been the popular vehicle and mainstream expression of Indian secularism. Not just in the content of the films that upheld India’s constitutional and secular values, but in practice, too.

Early Bollywood was largely built by Parsis and Muslims, two minorities. Diversity in Bollywood was never lip service, it was always practised. Simply look at the credits at the end of a Hindi film even today—you will find almost every religious and linguistic identity of India represented. Good stories need believable, relatable conflict and what more relatable ever-present conflict can there be in India than the curse of the colonial divide-and-rule policy—Hindu-Muslim conflict? And, thus, inter-faith love stories have found a space on the Hindi silver screen. Stories that carry the message that love is greater than societal divides. That love is God. Bollywood songs have done more to keep Urdu and easy-to-digest Sufi concepts alive and thriving, than any number of universities could have. Mixed marriages have been a norm among Bollywood stars and the Bollywood royalty have traditionally been liberal and secular. And, the greatest thorn in the right-wing eye—in a country with almost 80 per cent Hindus, three Muslim men—the Khan triumvirate—have ruled the hearts of audiences for the last 30 years.

The Hindu right wing understood better than us the power of Bollywood. It knows that to legitimise the idea of Hindu Rashtra, Indian secularism has to be delegitimised. And to delegitimise secularism one must delegitimise, discredit and destroy its most effective and popular proponent and expression—Bollywood! A comment in response to my tweet praising Laal Singh Chaddha sums it up: “Bollywood is the greatest obstacle for the Hindu Rashtra and thus the destruction of Bollywood will be the path to the [creation of] Hindu Rashtra.”

Poor Bollywood! It has no idea that in this epic battle for the soul of India, it has become Rome that the mob feels must fall.