Like in Iran, jail, in new India, is a real possibility for anyone

I have never been to Iran, but I have seen Iranian films of iconic auteurs like Majid Majidi, Jafar Panahi and Asghar Farhadi; and watched Hollywood films like Argo. And I have met the good people of that ancient land in different international locations.

My lengthy interaction with Iranians was in 2010 while on an international trip with various activists from Asian countries for the Palestinian cause. There were interesting similarities between the Indian and Iranian contingents. Both had a motley selection of people that could be generally divided into two kinds—the people representing various Muslim organisations from both countries, and the less organised ‘liberal’ lot comprising students, trade unionists, photographers and some vagabonds like me. Unsurprisingly, the liberals befriended the liberals. We could sense the tension between the two groups of Iranians. The liberal Iranians were ever wary of the pro-regime Iranians and avoided them astutely. One of them alerted us in cautious whispers that we should be careful because some of the pro-regime Iranians were spies for the Iranian police. 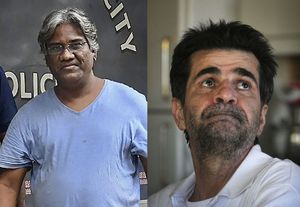 We had fun, exchanged jokes, stories, songs and slogans of the cause. One of the young liberals became a good friend. He was an artist—sensitive, creative and deeply thoughtful. I often wondered why he had an air of sadness about him. He came to India upon my invitation a few months later and attended a friend’s wedding. I remember him laughing and resisting as we dragged him onto the dance floor. He said to me that night as the whole bunch of us danced in happy abandon, “You people are very lucky, you have no worries!”

I have thought of my Iranian friend and his sadness often in these past few years. There are too many people from my social circle, some whose scholarly works and articles I have studied, whose documentaries I have seen, who are now in jail under draconian laws. At least three people I would call friends are in jail, in obviously vendetta-driven cases and I personally have a criminal lawyer on speed dial, just in case! Jail, in new India, is a real possibility for anyone, at any time, anywhere.

It could be a tweet, a biryani lunch in your tiffin, a date with a Muslim friend or lover, a painting you made or posted online, a joke you cracked, a joke you laughed at, your job as a journalist, or, heck, the knee pain that prevented you from standing up during the national anthem—literally anything you do in new India could be interpreted as hurting religious sentiments, tarnishing the reputation of the powers that be or threatening the very sovereignty of our great nation.

As I attempt to produce my own film, the real cost of my frank opinions is apparent to me. Producers and potential financiers love my script and then add sheepishly, “Ma’am, be silent on Twitter.”

Friends in the industry tell me that so-and-so wants to cast you in their film /web series, but the platform is worried that your presence will cause controversy. My parents live in the real worry that the multiple criminal complaints filed against my tweets could one day cause my arrest. My mother sends me sincere emails pointing out that caution may not be cowardice, sometimes it is wisdom. She is probably right.

A few days ago, Avinash Das, the director of my film Anaarkali of Aarah, was arrested by the Gujarat Police for sharing online a picture of Amit Shah with arrested IAS officer Pooja Singhal, and for sharing an image by a graphic artist who reimagined India as a pin-up girl. Coincidentally, on the very day that Avinash was arrested, Iran’s judiciary announced that Panahi would serve a six-year jail sentence after being arrested for criticising the Iranian government.

I finally understand the sadness that seemed to always surround my Iranian friend. I recall when he told me that we Indians were lucky because we had no worries. I want him to know that we now have the same worries too!