Being indifferent is worse than being wrong

My niece was born in October last year. This week I came home after a two-month-long trip to the US, and found her grown into her own little person. My sister-in-law was back from her natal home in Lucknow and my parents’ house in Delhi was re-adjusted to the baby’s routine, much to our dog Godot’s indignation.

It is fun having a baby at home. We wake up to sounds of her gurgling, cradle her to give my sister-in-law an occasional respite, chat with her and read her stories to keep her energies engaged. And her smile, which she is generous with, brightens the hours as we battle Delhi’s heatwave. Some days ago, my niece was deposited in my newspaper-devouring father’s lap. As her ‘Tata’ balanced her, he playfully said, “Let’s read newspapers, bangaaru talli [golden girl]”

‘Afghan Taliban orders women to cover up head to toe in public.’

‘US Supreme Court likely to strike down Roe vs Wade ruling.’

“This is unfortunate! Let’s look at national news, maybe there’s some cause for cheer in that.”

‘BJP MLA’s speech calls for Muslims to be burnt like Ravan effigies during Dussehra.’ 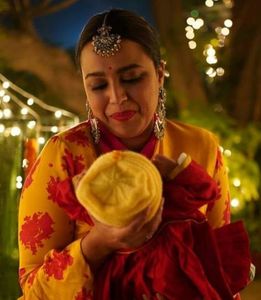 “Bhaskar, please stop! Is this appropriate for an infant to be listening to?” cried my mother taking my niece from my befuddled father’s lap, who continued to scan the paper for some less dismal headlines.

“Uff, Bhaskar! You are incorrigible!” Declared my mother and marched out of the room carrying her chortling granddaughter.

I smiled at the exchange but also at the irony of the fact that an infant girl in 2022 stared at the prospect of her body and bodily choices being policed by various groups of men in power, across the world. My niece will go to the US, where her mother is completing her PhD at one of the country’s premiere Ivy League universities; even as the country rules to make abortions illegal and deny women the right to bodily self-determination. I repeat, it’s 2022, folks!

Back home, I must (unfortunately) thank destiny that my niece is not born into a Muslim family, else she stares at the possibility (in some years) of her images being circulated on virtual slave auctions, being brutally trolled simply for her identity and should she wear a hijab, then being denied entry into educational institutions. Heaven forbid, if she were born into a poor Muslim family, she would stand to have her home or her parents’ small kiosk demolished as TV cameras flashed and media vultures cheered sitting atop JCB bulldozers mocking her poverty and pain.

I wonder how liberal-minded parents, nay, decent people bring up children in a world where abuse-of-power is normal and injustice is meant to be unseen. How do you teach children about right and wrong in a society that repeatedly votes for an ideology that has turned moral wrongs into a vulgar flex of power? How do you teach children about ethics in a world where you-get-to-do-what-you-want-as-long-as-you-are-rich-or-powerful is the way of life? How do you teach them to stand up for what is right when they face the prospect of indefinite jail time?

You teach them to fight, says a friend of mine, mother of two girls who took them to a peaceful citizens protest against the CAA-NRC project in their university town in the US.

And I think to myself that indeed, being indifferent is worse than being wrong!

Back home, my father enters the room as my niece wakes up. He is clutching a newspaper.

My mother looks doubtful. He reads.

‘Bulldozers leave. Massive protests by residents and activists cause demolition drive to be stayed at Delhi’s Shaheen Bagh.’ And he shows my niece a picture of advocate Aarfa Khanam, a female resident of Shaheen Bagh, atop a bulldozer’s wide demolishing ‘blade’.

In a moment that the universe surely conspired to create, my niece smiles and extends a tiny fist.