'We all stand guilty to its myriad crimes' 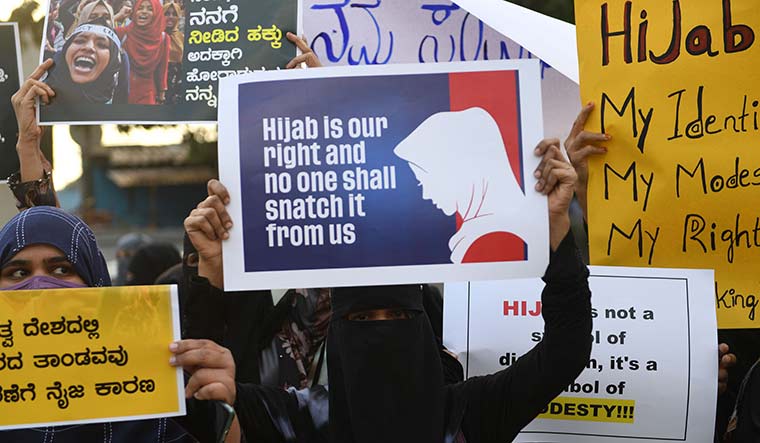 Bullying, or taking pleasure in the discomfort and humiliation of those who are weaker than us, is the vilest expression and abuse of power. In the past eight years, Indians have become used to videos offering the evil pleasure of seeing Muslims, Christians and dalits harassed and humiliated. The videos circulate on social media eliciting cheers and celebratory jeers. In this hindutva-driven national pastime of humiliating India’s minorities, the latest episode is the wholly manufactured ‘hijab controversy’.

What started out as one bigoted principal’s unilateral action of disallowing Muslim students from entering a college in Udupi, Karnataka, till they removed their hijab, has now blown into an ugly row that is fast spreading to other states. The Karnataka High Court, in an interim order, disallowed students from wearing any religious garment while the case was sub judice. While the order was restricted to educational institutions with a dress code, it has been gleefully interpreted as a general ban on hijab. Some schools have been preventing the entry of hijab-wearing teachers as well. In a particularly distasteful incident, the video of which went viral, a teacher was made to remove her hijab outside school gates.

Right-wing media anchors and commentators have tried to spin the matter as a debate on the Islamic cultural practice of covering the female body. The attempt is to appropriate the feminist discourse of ‘liberating’ the female body from regressive practices. It should be fairly obvious to any rational mind that true freedom means the liberty to choose your dress without coercion. But if the coercion to don a garb is wrong, the coercion to remove it is wrong as well.

But let us not pretend that this debate is about women’s rights. After Sulli Deals, Bulli Bai and the genocidal calls at so-called dharm sansads, the hijab controversy is only yet another way for hindutva forces in the country to humiliate and segregate Muslim women, and deny them their basic rights unless they cow down to hindutva’s diktats. Perhaps the greatest victory of the hindutva project in India is the enthusiastic spontaneity with which this brute majoritarian bullying of minorities is being adopted and cheered by large sections of ‘regular Indians’—those who are not formal members of any sangh parivar outfit. It is deeply unfortunate that the judiciary, whose purpose is to protect and uphold the Constitution, has abdicated its duties. The Karnataka High Court’s interim order on the hijab case potentially subverts Article 25 of our Constitution. The fundamental right to freedom of religion is inalienable; the interim order potentially denies this right.

This sorry state of affairs in our country has caused more than one kind of loss. It is not only Muslim women who stand to lose their right to education and freedom to practice their religion, ‘regular Indian people’ as well have lost something. Something we probably do not realise we have lost. The hindutva culture of public bullying has made it impossible for a normal citizen—more specifically, a member of the Hindu majority—to have a clean conscience or ethical integrity. How can we claim to be conscientious citizens, or even decent human beings, when hooligans-in-power continue to find new ways to humiliate India’s minorities in our name every day?

What values of humanity are we pretending to impart to our children when we remain silent when even basic rights are denied to Muslim children? How do we stand with folded hands in the temple and ask Lord Ram for blessings knowing full well that we have allowed his name to be turned into a murderous war cry? How do we sleep with a clean conscience knowing that we, too, have witnessed Draupadi being disrobed publicly and have actively chosen Dhritarashtra’s blindness?

Today, it is impossible for a Hindu in India to have an unburdened conscience. The electoral mandate for the hindutva project was granted by us; we all stand guilty to its myriad crimes.