Swara Bhasker writes on the Sanghi hatred for Bollywood

Aryan Khan, son of Shah Rukh Khan, is in jail. At the time of writing this, no drugs have been recovered from him, but he has repeatedly been denied bail on technical grounds. Public discourse in India is ablaze, along the usual fault lines, and mainstream electronic pro-government media, aka godi media, is having a field day reporting tripe like: ‘What did Aryan Khan eat in his jail cell?’

After the Sushant Singh Rajput suicide, Rhea Chakraborty and drugs, this is the latest scandal in Bollywood. On both sides of the debate, the figure of SRK looms large; being destroyed and discredited by one side and glorified by the other. It is not the first time that SRK finds himself at the centre of a polarised debate. Since 2014, SRK has been repeatedly attacked, often times with false WhatsApp viral rumours, misquoted memes and plain lies. His films have been targeted with calls for boycotts, often successfully. His last release Zero (2018) did not even open to basic footfalls in Gujarat, lucrative territory for distributors. It is fairly obvious to anyone who witnesses this whole spectacle with a somewhat balanced mind that Aryan is being made an example of; and that Bollywood has repeatedly been tarnished by the right-wing media.

To what end, though?

It is not actually hard to understand why Bollywood is so hated by the Sanghi imagination. The whole ideology of Hindutva is premised on a distinction between real pure or full Indians (non beef-eating Hindus) and those who are ‘less’ Indian because they are adulterated by conversion of their ancestors to Islam or Christianity, and now Sikhism.The full Indians/Hindus have a greater claim on the motherland, love India more and are truly patriotic. The ‘adulterated’ non-Hindu Indians deserve constant suspicion. Maintaining this constant distrust of the non-Hindu Indian is central to the Hindutva project. Because how else do we unite an identity as divided (by caste, language and ethnicity) as Hindus? By instilling fear of attack by a perceived enemy—close enough to be identified, distinct enough to be marked—the beef-eating, converted non-Hindu Indian. 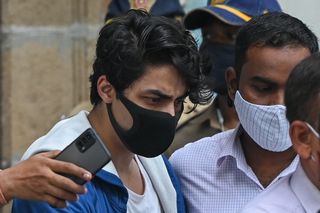 Within the popular imagination, one of the biggest challenges to this Hindutva project has been Bollywood and its 100+ year legacy of (largely) celebrating inclusion, love and secular constitutional values through its films. Whether it was obviously intended films like Dharmputra (1961) or the figure of the ‘good, kind and righteous Muslim’ in mainstream films like Sholay, Zanjeer, or later Sarfarosh and Khakee, Muslim socials like Pakeezah, Chaudhavin Ka Chand or historicals like Mughal-E-Azam, and later Bajirao Mastani and Jodhaa Akbar, mainstream Bollywood till recently seemed to remain committed to being a vehicle for communal harmony.

Right up to these last few years, Hindu-Muslim love stories remained popular and evoked the more Sufi-Bhakti idea, that the greatest religion is love. Most of these films were hits or superhits, be it Bombay, Zakhm, Veer Zara, Jodhaa Akbar, Bajirao Mastani or Kedarnath. Mainstream Hindi film songs, even formula item numbers, continue to be written with a heavy usage of lyrical Urdu, and finally the presence of popular Muslims working both behind and in front of the camera in Bollywood is striking.

Interestingly, SRK, since his rise to stardom, with Baazigar (1993) and superstardom with Dilwale Dulhania Le Jayenge (1995), has himself become almost the living example that you can be a believing Muslim and a patriotic Indian at the same time. Moreover, his success and the wild popularity he has amongst India’s Hindu cine-going audience makes his very existence a threat to Hindutva propaganda. It is no surprise then that SRK and Bollywood—despite refusal to engage in controversies from the former and unctuousness towards the government from sections of the latter—would remain a thorn in the eye of the Sanghi imagination.

SRK’s role as the wrongly accused Muslim coach of the women’s hockey team in Chak De! India (2007) is almost a meta reference to the witch-hunt we witness today.

Yes, Aryan is being made an example of, and I think we all know why.