Adapt Gandhi’s teachings in our own ways to suit our chaotic lives: Swara Bhasker

The idea of non-violent resistance to injustice is age-old. Be it the Jews demonstrating in ancient Caesarea against the idolatry of Pontius Pilate or the suffragette activist women’s organisation in 19th century Britain. But the name most associated with non-violent resistance across the world is Mahatma Gandhi.

The IT boom, the birth of social media and the invention of the phone camera have given peaceful protest a savvy new weapon and the convenience of being able to participate in principled protest from the drawing room or work-place. 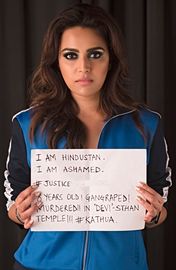 One such non-violent protest that we organised, using the phone camera and social media, was while shooting the hit song ‘Tareefan’ for my film Veere Di Wedding. It was April 2018, and the sinister Kathua gangrape case had caused a huge furore in public discourse in the country. An eight-year-old child of the nomadic Bakarwal community had been abducted and gangraped for a week and murdered in a local temple in Jammu. When the accused were arrested a ‘pro-rape’ rally was taken out in support of the rapists, where ‘Bharat Mata Ki Jai’ slogans had been raised and two BJP ministers were in attendance. Every sane minded Indian was enraged.

I was on set in an uncomfortable costume that was both too tight and too short and was practicing my dance moves in heels, while choreographer Farah Khan made corrections. Rapper Badshah had just arrived. Kareena Kapoor, Sonam Kapoor and Shikha Talsania were also practicing their steps. The set had a placard reading #NotAChickFlick. Producer Rhea Kapoor rejected the design of the placard but an idea struck me. Why not start a campaign where celebrities stood with placards condemning the dastardly gangrape and murder of a child and invited citizens to voice their anger, too? I scrambled to my vanity and started writing the sample text. Shame and helpless rage were the sentiments I felt most.

An assistant director knocked and said, “Shot ready.” I struggled to get back into my heels and made the changes on my phone as I walked—’I am Hindustan. I am Ashamed. #JusticeForOurChild. 8 Years old. Gangraped. Murdered in ‘Devi’-sthaan Temple. #Kathua.’

“Please write this out in clear capital letters on a A4 sheet and bring it on set,” I texted my manager.

On set the sound system kept blaring the one line we had to shoot—Nakhrey kyun kardi ai, mainu jachdaa nahi, inna sawaal kardi main sunndaa nahi. I danced. “Cut! One more,” I could hear Farah call out my manager, who came with the paper. We clicked pics of me standing with the placard. “Shot ready,” yelled the assistant director. We went back to repeating our `dance moves this time to a different camera angle. Between the next few shots Kareena, Sonam and Shikha had readily agreed to participate. Over the course of the day, I found 15 more people on set willing to participate.

Shoot wrapped. Rhea announced that we had to do trials for the next day’s tight short costumes. I spent the trial WhatsApping friends in the industry to participate in the protest, forwarding them the text. By evening the protest was viral as a couple of thousand common citizens tweeted echoing the rage that we had felt at the brutality that innocent child had endured.

I felt a distinct sense of purpose. We could adapt Gandhi’s teachings in our own eclectic ways to suit our chaotic lives. I followed the tweets and noticed a trend that was fast catching on: #BoycottVeereDiWedding

The reason: our placard protest had insulted Hinduism by mentioning the fact that the child was gangraped in a temple compound. To these trolls committing a crime in a temple compound was kosher. By evening #BoycottVeereDiWedding was trending, and I was realising with some horror that you did not have to respect Gandhi’s values to use his methods. The Sanghi IT cells also adopted non-violent protest, i.e., boycott to counter a non-violent protest against a violent crime. I realised then if the intent is non-existent and not morally credible, non-violent methods mean nothing.

Gandhi was eternal because he brought soul to non-violent resistance.