Last week, an unexpected controversy fired up electronic and social media, following the leaking of screen grabs of a private Instagram group chat called #BoisLockerRoom. Shockingly, this group discussed in sexual, vulgar and sleazy detail their female classmates—sharing morphed and semi-nude photos of underage girls, and fantasising about what sexual exploits could be performed on them.

Perhaps, the real stunner was the fact that a majority of the participants of this group were boys from elite Delhi schools, aged 14 to 15. Only the admin of the group was a young adult. 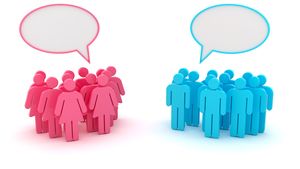 As the screen grabs went viral on social media, outrage exploded. Women and men condemned the contents of the group and discussed how ‘rape culture’ was rampant in India. News channels ran debates and interviewed the whistleblower. The Delhi Commission for Women and the Delhi Police got into action mode, eventually the admin was arrested and the most active child member of the group was apprehended. Twenty-four other members were questioned.

The debates on social media were equally polarised with many boys starting a trend #GirlsLockerRoom, making a false equivalence, claiming that girls also talk about sex. Many raised the question why girls were sending nudes of themselves to any boy.

The chat was honest all right! The most striking feature of the chat, for me, was the constant denial by numerous men, and a few women, that the chats had anything to do with gender! “Don’t make it a gender issue—it is just a few bad individuals.” “It’s not boys versus girls!” “It’s not a man/woman thing.” “What about fake feminism?” “Always playing the victim card!” “What about the suicide of Manav?” (In an unrelated case, a 17-year-old boy from Gurugram committed suicide when sexual harassment allegations against him surfaced on social media.)

When a group of 50 boys share—without permission—semi-nude photos of their underage female classmates and then slut-shame, body-shame, and objectify and sexualise those girls—also inviting one of the girls into the chat to shame her—how is that not related to gender and the power dynamics of how gender operates even at that young age?

To add a twist to the plot, two screenshots from a Snapchat chat, in which a ‘Siddharth’ suggested to another boy that they “rape and gang-rape” a female classmate, turned out to be fake—the girl in question was pretending to be Siddharth, to test the boy’s character. Gender naysayers got the chance they wanted to delegitimise anyone questioning what happened on the Bois Locker Room. Suddenly, all these victorious handles were sharing ‘we told you so’, ‘Men were the real victims’ kind of tweets. Despite a clarification from the police that the fake snapchat screenshot had nothing to do with Bois Locker Room chats, the din from the gender naysayers didn’t die down.

People ignored the plain fact that these boys had betrayed the trust of their female classmates and friends. Some of these girls (whose nudes were circulated) were friends with some of these boys and had willingly sent them semi-nude pictures. However, without taking consent of those underage girls, these boys would share those pictures in the group. This is circulation of child pornography. But the die had been cast—suddenly the Locker Room boys were the victims and women were manipulative liars. This round the gender naysayers had won, and the feminist cause had lost.

Now, I am not saying the girl who faked her identity to incite rape as a character test was right—she should certainly face consequences for her thoughtless stupidity. But by denying that gender and gendered-inequality and gendered-power relations even exist, are we as a society not reinforcing the very inequalities that give rise to gender-related crimes in the first place?