In defence of protest as picnic

Ideologies of hate abhor proof of coexistence. This is true of Salafism’s stringent hate of Sufism and this is true of hindutva nationalism’s revulsion of India’s syncretic traditions and intermingled Ganga-Jamuni tehzeeb. Interestingly, the ongoing anti-CAA-NRC-NPR and pro-Constitution protests across the country had begun to reflect the syncretic nature of India’s diversity and to show themselves as comfortable in practising the idea of coexistence. In most protests, the largest participation came from Muslim communities, and yet there has been the presence of students, activists and artists from more cosmopolitan and non-Muslim backgrounds.

A friend who lives in Okhla, New Delhi, narrated an interesting incident. He was at the Shaheen Bagh protest site on a cold December night when he saw a group of “old mullahs” (his words) sitting beside a small fire near the road, smoking beedis. A young urban-looking woman, one of the artists who had performed that evening, came near the fire, lit a cigarette and began to exhale more smoke into the foggy night. The discomfort among the old men was apparent. Some shifted uneasily, one turned his face in disgust, another frowned and two simply got up and walked away. The woman did not seem to notice, nor cared if she had. My friend, himself a Muslim, noted the response and thought it typical. 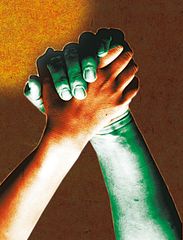 The protests continued, the government refused to budge and more protests sprung up. January came and went and this young man found himself at Shaheen Bagh once again. He noticed that the same group of old men were sitting around the fire, smoking their beedis. They looked at him and he touched his hand to his head in courtesy. They nodded. In some time, a young girl sauntered by. She looked all of 21 or 22, and had the look of a typical Delhi University student—jeans, shawl, chunky silver earrings and lots of kajal lining her eyes. She took out a cigarette and began to search for a light. Not finding one, she made as if to move her face towards the fire. “Arre, yeh lo... (Here, take this),” said one of the old men, and held out a matchbox. The girl accepted it, smiling, and thanked him. The man wordlessly waved her off in a gesture that was part the salaam of solidarity, part the ‘mention not’ of courtesy.

The protests, rationalised my friend to me, have led to a huge churning in the Muslim community. They have broken the insular nature of ghetto existence. Muslims are meeting people from different communities; burqa-clad women are chatting up radical feminists, both going beyond the segregation of garb. Young Hindus brought up in sheltered ‘majority localities’ are hanging out in ghettoes their parents warned not to enter. Everyone is learning a new song, a new slogan. Everyone is breathing the peaceful coexistence, and the spirit of fraternity is palpable.

And then the din begins. “Clear the traffic! Shoot the traitors!” yell saffron-clad leaders, whose concern for civic discomforts do not extend to the people whose very existence is being threatened. Violence that is too efficient to be spontaneous erupts and for three days, northeast Delhi burns. Both Muslims and Hindus die, but the damage to Muslims is far greater. As the embers of the hate burn out, once again stories of coexistence take root. A Muslim family ensuring a Hindu wedding takes place; a Hindu man incurring 70 per cent burns to save six Muslim lives. Humanity finds nooks and crannies even in the most frightful hate orgies.

It begs the question: Who had a problem with ‘protest as picnic’? Who is threatened by peaceful coexistence of communities in this country?