Do women scare you, trolls? 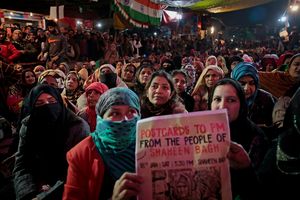 The hateful, jeering and abusive comments only bear witness to how threatened Indian (toxic) masculinity is by an onscreen enactment of a fictitious, unapologetic woman who has a desire for sexual pleasure and chooses the path of self-gratification. Numerous men (and women) in our country find their moral consciousness enraged to see female masturbation depicted on screen, but have no issue with the depiction of graphic rape scenes and fetishised violence against women. Their skewed morality has no problem with abusing women with the most filthy sexual slurs imaginable. My social media comments section stands proof to the number of times in a day that endless users have referenced my ungli (finger) as a supposed shaming comeback to something I have posted on a wholly unrelated topic.

If this is how scared toxic Indian masculinity is of female self expression by a fictional character, imagine how much fear a real, strong, unapologetic woman would inspire? The answer is clear in how most of the Hindu right-wing troll machinery has responded to the women’s sit-in protests at Shaheen Bagh, New Delhi. The fact that hijab-clad women, many of them homemakers, have asserted themselves so unequivocally has been something the right-wing has barely been able to digest. Most users who ceaselessly reference my masturbation scene in a derogatory manner are the same people who are tirelessly spreading fake information in an effort to denigrate Shaheen Bagh women and other such female-led peaceful protests across the country against the CAA-NRC-NPR plans of the government. As long as the hijab-clad women were in their homes, these people were screaming themselves hoarse with sympathy for their so-called oppression at the hands of their husbands, fathers and Muslim men in general. Their silence on and ostensible absence from mainstream public narratives and view made it convenient for the right-wing to be able to play its toxic, agenda-driven politics on the bodies of these women. They were able to hail a bill potentially criminalising all Muslim men under the garb of ‘saving’ Muslim women from triple talaq.

Now, these same women are on the streets, on TV cameras, in WhatsApp videos articulating their views and their fears, but most importantly asserting themselves, their identity and their rights. And, the right-wing’s toxic masculinity-laden mindset has no rational or objective response to it. And so, they resort to what they know best—spreading rumours and fake news. A rumour spread that Shaheen Bagh women were being paid 0500 a day to protest. Undeterred, the women sat. Soon, fact-checking websites found that the rumours were based on a fake ‘sting’ operation. Today, there was a new rumour, tomorrow there will be another. The Shaheen Bagh women (we hope) will continue to sit. For, the best way to deal with lies, hate and deceit is to sit with your truth and stand for your rights. The power of the status quo often turns out to be a lot more fragile than the creaking bones and wrinkled skin of 80-year-old grandmothers whose resilience has woken the consciousness of a nation.