My mother, me and JNU

For as long as I can recall, my mother, Prof Ira Bhaskar, has always had her students looming around her. She became a teacher before I was born, and my childhood was spent watching her diligently mark the midterm or final answer sheets. I was always amused by how her comments were often longer than the students’ answers. As a child, I harboured a grudge against these students whom my mom often brought home for a meal, especially if they lived alone in the city. As I grew older, a few of them became close family friends, some were remembered at a distance and most just disappeared into adult life.

My mother’s commitment to her students is the subject of many family jokes, as the answer sheets made an appearance on more than one family vacation. But my mother has persevered with her dedication to her profession and her students. I have watched the lives of some of the students transform as my mother’s classes initially on D.H. Lawrence and Joseph Conrad and subsequently on Ritwik Ghatak and ‘melodrama in film’ resonated in personal ways for more than one student. Many young girls found meaning in the tumultuous choices that they were faced with in life through the classes and conversations with my mother. A young woman from a deeply conservative, repressive family broke out on her own and built an independent working life; a Sikh girl in love with a Kashmiri Muslim was able to convince her parents and marry him; a dalit student from a very modest and unsupportive background was able to complete her PhD and find a job; in New York, one student revealed to my mother that her classes provided a respite from an overbearing mafioso boyfriend and inspired her to complete her education. 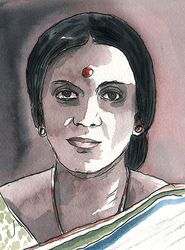 I have watched my mother spend her whole life dedicated to building government institutions that were founded on the principle that higher education must be available to all; institutions built with the vision that education is a means of empowerment and liberation. My mother and her colleagues are people who have spent their lives shaping the futures of children whom they will not see after the three- or five-year courses on campus.

Today, I watch as these people battle an assault on higher education and its public funding. I watch these teachers of Jawaharlal Nehru University, as a hostile and agenda-driven university administration takes unilateral decisions to dilute teachers’ roles in the creation of entrance exam papers, appointment decisions and in the running of the university. I watch them agitate in support of their students who are labelled antinational, terrorists and Naxals. I watch my mother battle bewilderment, indignation and hurt as she and her colleagues are called commies, libtards, AAPtards, sikulars, Naxal sympathisers, Congress funded-, anti-Hindus on social media and in some regular media outlets. Sometimes she asks me what these terms mean. I hear from her students that she intervened in the mob frenzy situation and challenged the mob, comprising many ‘outsiders’ who were trying to lynch the newly elected JNU students union members while chanting ‘Bharat Mata Ki Jai’ in front of a police station! I see her go to police stations as her students are detained for protesting a 600 per cent hike in their hostel fees. “Can you believe that 43 per cent of these students will have to deregister if the hike comes into effect?” she asks. “They will not be able to complete their degrees.”

I hear her pain as she often repeats, “I will not live to see things change in my lifetime. I have lost the India I grew up in.” And then I see the spirit of the guide in her rise to the occasion as beleaguered students ask her, “What is the point? We are helpless. What should we do?”