What JNU taught me

Jawaharlal Nehru University has achieved both iconic status and a glamorous notoriety in the last three-and-a-half years, in no small part, thanks to the contribution of an electronic media frothing at the mouth, in a so-called nationalist hysteria. One MLA, in 2016, from a ruling party, went as far as rummaging through JNU’s trash; he claimed to have found 3,000 condoms.

Abhijit Banerjee’s recent Nobel win brought the university back into public discussion. I must admit that as a JNU alumna myself, I did feel more than a tinge of pride and spent the day gloating in my head and having imaginary ‘I-told-you-so’ conversations with JNU-haters. 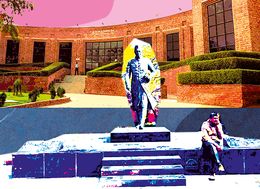 JNU is indeed a special place. Upon my admission into the university I was most struck by the fact that I—urban, English medium, private-school-educated and hereditary member of what would become ‘The Khan Market Gang’—was in fact a minority in JNU. The university’s then admission policy (now changed) recognised the need for a progressive sensitised framework that would truly make higher education accessible to the majority of aspirants in the country. The university ran entrance exam centres in numerous cities in India. You could write the exam in your mother tongue, and the grading system awarded deprivation points; the lower down you were on the development index, the more deprivation points you got. JNU students’ union even conducted free tuition classes on campus for JNU aspirants and these classes were conducted voluntarily by students. This ensured that the students entering JNU represented the widest cross section of society with a solid representation of ‘real India’.

Hostels were, and continue to be, co-ed and, interestingly, girls have more freedom than boys—girls can enter boys’ hostels but boys cannot do the same. Messes are common and after dinner serve as a space to conduct extracurricular activities. There is no rule of closing time at hostels, and eateries are open till late. One, in fact, is a 24/7 eatery.

JNU is special because it changes lives by recognising that education is not, and should not be, a privilege of the few, but rather a birthright of everyone. The spirit of JNU is important, especially in today’s time, because it is the spirit of our Constitution. It recognises that any really worthwhile education and learning can only take place in a culture of freedom, inquiry and openness. This is a learning that should ideally make one not just qualified but also aware and empathetic. JNU is the best example of the success of public funding in higher education. Instead of deriding and destroying JNU, the powers that be ought to consider it a model university and create more JNUs.