Moditva doctrine is all about autocratic concentration of power: Shashi Tharoor

Is democracy under threat in India? Indeed, has India already ceased to be democratic?

This may seem an odd question to ask in the aftermath of five successful state elections, conducted largely freely and fairly and only one of which the BJP won. Yet, if one were to read the annual reports of Freedom House, the American think-tank, which downgraded India this year from “free” to only “partly free”, or the prestigious V-Dem Institute in Sweden, which described India as an “electoral autocracy”, then we have indeed slipped out of the ranks of the world’s democracies. Elections can be democratic, but true democracy is about what happens between elections.

It has not helped that since this government came to office in 2014, we have witnessed a striking dilution of independence at the highest levels of our autonomous institutions, from financial regulators like the Reserve Bank to institutions of accountability like the Central Information Commission; that questions have been raised about even hitherto sacrosanct bodies like the Election Commission and the upper echelons of the armed forces; and that Parliament, the judiciary and even the free press are widely perceived as insufficiently free of the government’s influence.

Part of the reason behind this systemic crumbling stems from the Moditva doctrine and its inherently autocratic concentration of power. Moditva articulates a cultural nationalism anchored in the RSS political doctrine of hindutva, but building upon it the idea of a strong leader, powerful and decisive, who embodies the nation. Autonomous public institutions threaten the Moditva doctrine because, by design, they are independent. This is why their authority must be undermined, and the “nationalist” argument advanced that opposition and dissent are by definition anti-national. The fear is that ethno-nationalism is taking India towards a peculiar hybrid, a ‘dictatocracy’ which preserves the forms of democracy while brooking no dissent against its dictates. 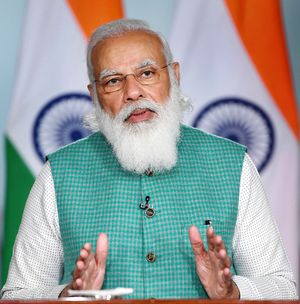 If the de-institutionalisation of Indian governance proceeds like this, the greatest danger facing India will be that of the public losing faith in the system altogether. This is already taking place in many other parts of the world. In a widely discussed paper, Harvard scholars Yascha Mounk and Roberto Foa argue that the health of liberal democracies across the world is degenerating (the term of art being ‘democratic deconsolidation’). Drawing on global data, they show that there has been a considerable dilution of support for democracy and a growing impatience with the democratic process, especially among the so-called ‘millennial’ generations (those born after the 1980s), and that we can no longer assume that the future of democracy is secure.

Indeed, support for non-democratic or authoritarian models of governance is rising in many democracies. India is among the worst in the Mounk–Foa data. More than 70 per cent of Indian respondents felt that “a strong leader who does not have to bother with parliament and elections is a ‘good’ way to run this country”, higher than even Pakistan, with 62 per cent. In a recent CSDS–Azim Premji University survey, over 50 per cent of respondents in four large states expressed a preference for an authoritarian alternative to our existing democracy.

While for many apologists of India’s government, the mere conduct of reasonably free and fair elections is defence enough, democracy can only flourish if the system maintains checks and balances, promotes consensus, and ensures institutional autonomy. Otherwise we become another “illiberal democracy”.

The immortal JP argued that democracy should not be reduced to a crowd of sheep electing their shepherd every five years. The confidence that the people of India have in our system rests in the belief that it will work fairly. If their faith erodes, it will weaken the very foundations of the democracy that we take for granted. Political parties and the ruling powers of the day will come and go, but free institutions are the enduring pillars of any democracy. Their independence, integrity and professionalism are meant to inure them from the political pressures of the day. We must not let Moditva destroy them.