The battle to belong

When these words appear, our 71st Republic Day will just be behind us. Our national celebrations of this anniversary of the entry into force of our Constitution have been tempered by the raging coronavirus pandemic, which already claimed the event’s chief guest, British Prime Minister Boris Johnson, who cancelled his visit because of the emergence of a new mutant strain of Covid-19 in his country. But for many of us, the mood of celebration was also dampened by the realisation that never before has the Constitution we are celebrating seemed under such threat, with some scholars even writing of the dawn of a second republic that may have already supplanted the one established on January 26, 1950.

I have tried to deal with this challenge in my new non-fiction magnum opus, The Battle of Belonging: On Nationalism, Patriotism and What It Means to Be Indian, which seeks to expand our current political mudslinging into a serious debate on the concept of nationalism and Indian nationhood. These are themes that have increasingly become relevant around the world and are contested in contemporary India today, since some have been promoting a version of nationalism that foments division and fragmentation within our society.

The second theme is the evolution of Indian nationalism from the anti-colonial days to the civic nationalism enshrined in the Constitution. The nationalism that inspired the long struggle for independence was rooted in India’s time-honoured civilisational traditions of inclusivity, social justice, religious tolerance, and the desire to forge a society that allowed individuals to flourish, irrespective of their religion, caste, language or place of birth. This constitutional idea of India is being challenged by a new dominant narrative that thrives on an exclusionary, aggressive, communal nationalism based on cultural identity and the notion that India is a Hindu Rashtra. 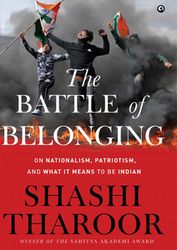 In the process, as I explain in the final third of the book, the idea of “patriotism” has been redefined by the majoritarians. In my view, “patriotism” is about loving your country because it is yours, because you belong to it and it belongs to you. It excludes no Indian. Whereas the nationalism being promoted in India today is a totalising vision that omits those who do not subscribe to it.

In today’s India, the question of what it means to be Indian has attained paramount importance. Our liberal constitutionalism and democratic traditions are fundamentally questioned by rising intolerance, in which the forces unleashed by our rulers tell Indians what they cannot eat, who they cannot love, what thoughts they cannot hold, what words they must not say (and jokes they must not crack). Their political attack on opponents as “anti-national” conceals authoritarian instincts.

In the concluding section of the book, I share my vision for India’s future, of reclaiming a nationalism that reaffirms the Constitution’s liberal and inclusive idea of India and proudly proclaims that our patriotism celebrates pluralism.

Though I have written a lot in the past on the havoc wreaked on the social, cultural, and political values of India by intolerant and nativist forces, this Republic Day is the time to re-examine the issues revolving around the idea of India, nationalism, patriotism, and the struggle between those who believe in the ideals bequeathed to the nation by the founding fathers and those who would destroy everything valuable about our country. My book is my contribution to this vital national conversation.