India not prepared for coronavirus

India seems quite blase about the coronavirus disease 2019 (Covid-19), even as it spreads alarmingly through China, with more than 75,000 people being infected and the number of fatalities climbing upwards. The World Health Organization has declared the outbreak a Public Health Emergency of International Concern. And, India, with all its vulnerabilities, could be a prime candidate for a disaster, and we are not well prepared.

The worst may yet not come to pass. Only three cases of infection, all involving medical students from Wuhan, have been confirmed; all three have been sent home after hospital isolation ended in negative tests. India successfully evacuated 324 students from Wuhan, who were in a quarantine facility in Manesar, less than two hours from Delhi, where no one had tested positive for the virus. Some 4,000 people were reported to be under observation at isolation wards across the country. The number of confirmed cases, however, has mercifully not gone up. 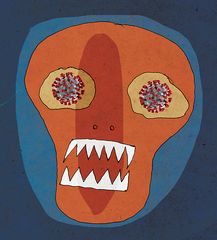 The government has sprung into action and instituted health measures at airports and ports, including entry screening, travel advisories and signages, with checks of any travellers showing signs of cold or fever. But infected persons could still slip through in the asymptomatic yet infectious phase of the illness. One sees very few staff or passengers sporting masks at Indian airports. If a carrier enters any city and mingles with people, the potential for the virus spreading rapidly remains high. In India, which has one of the world’s highest population densities, it is impossible to maintain the WHO-recommended three-feet distance between individuals.

Anyone in close contact with an infected person would need clinical assessment and restricted mobility till the two-week period, within which the virus incubates, is over. But there is no doubt that we would never be able to replicate China’s draconian measures to control the outbreak. The ongoing lockdown of Wuhan would be inconceivable in any Indian city.

There are worries about how well India is equipped to conduct disease surveillance, deploy adequate laboratory testing capacity, elevate hospital preparedness including infection prevention and control, and communicate effectively to the public. Hospitals are overcrowded and overburdened with little scope for a sudden influx of highly contagious patients. Public awareness is minimal, and no precautionary guidelines have yet been issued to the public by the Indian authorities, in English or in local languages.

There is no comprehensive nationwide surveillance system in place. Lab testing facilities are few and far between: though facilities were expanded since the swine flu threat arose a decade ago, samples from Kerala are being sent to a virology lab in Pune which remains the only one in India capable of testing for Covid-19. Against a 2012 proposal to set up 150 diagnostic and research labs with virological expertise, 80 are in various stages of operational readiness—a grossly inadequate number for a population of 1.3 billion. These are also not all linked to the public health response system.

Kerala’s handling of the Nipah virus, which claimed 17 lives in 2018, is our one success story. The state has learned its lessons well from handling that tragedy. However, not every state is like Kerala, and an outbreak almost anywhere else in the country is unlikely to be countered by an agile response system, adequate primary health care facilities to conduct the needed clinical assessments, sufficient lab capacity or effective isolation practices.

A serious virus epidemic would have a catastrophic impact on the country. Indians have been lucky so far that the suspected cases have been few enough to be manageable. We can only pray that it stays that way.