Patel was party to Article 370

As happens all too often in our country these days, the past has been evoked to fight the political battles of the present. The recent parliamentary debates on the abolition of Article 370 in Kashmir proved no exception. The ruling dispensation’s favourite whipping boy, our first prime minister Jawaharlal Nehru, has again come in for attack, with several BJP legislators demonising Nehru ji by name and alleging the Kashmir problem was his personal creation. Had Sardar Patel handled Kashmir, they averred, all of Kashmir would have been ours and there would have been no Article 370 to worry about today.

That is an odd claim, because it is a matter of historical record that when dealing with the three contested princely states within India which hesitated to accede to our Union—either because they wanted independence (Hyderabad and Kashmir), or because, defying geography and demography, they wished to join Pakistan (Junagadh)—Nehru ji and Patel worked together as a team in all three cases. Patel, in fact, was inclined to consider trading Kashmir for the other two, but Nehru ji would have none of it. 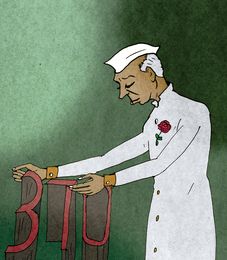 As to the question of Article 370, the BJP has repeatedly alleged that Nehru ji came up with this clause on his own and that Patel had nothing to do with it. But, in fact Nehru ji did not do anything on his own. Maharajah Hari Singh’s instrument of accession only covered defence, foreign affairs and communications; in Article 7 of the instrument, he explicitly reserved the right to negotiate other constitutional terms. Though his monarchical despotism was stoutly resisted by the popular leader, Sheikh Abdullah, on this point the Sheikh did not disagree with the Maharajah.

On October 15 and 16, 1949, Patel, Nehru and Abdullah met at Patel’s house in New Delhi. The cabinet minister without portfolio who was looking after Kashmir—its former Dewan, N. Gopalaswami Ayyangar—took detailed notes. He sent a summary of the notes of these conclusions to Patel on October 16 itself with the following covering note:

“Will you kindly let Jawaharlal Ji know your approval of it? He will issue the letter to Sheikh Abdullah only after receiving your approval.”

That approval came the next day from Patel. Only then was Article 370 brought into the Constitution of India on October 17, 1949. In other words, Patel was party to Article 370 in every detail.

The irony is that only in the parallel universe of the BJP’s reinvention of modern Indian history is this even a debatable subject. These records have now been declassified and made available.

With Article 370 done away with, all this is now relegated to history. But it is only fitting that we should let the man whom the BJP has depicted as the villain of this saga—the towering nationalist who did so much to win us our Independence and consolidate it, Nehru ji, have the last word. What did he say on this subject? “I say with all respect to our Constitution that it just does not matter what your Constitution says,” he pointed out, “If the people of Kashmir do not want it, it will not go there. Because what is the alternative? The alternative is compulsion and coercion….”

And he added in the Lok Sabha in August 1952: “We have fought the good fight about Kashmir on the field of battle... (and) ...in many a chancellery of the world and in the United Nations, but, above all, we have fought this fight in the hearts and minds of men and women of that State of Jammu and Kashmir. Because, ultimately—I say this with all deference to this Parliament—the decision will be made in the hearts and minds of the men and women of Kashmir; neither in this Parliament, nor in the United Nations nor by anybody else.”

This is sage advice we should remember today.