One of the saddest developments in recent Indian government policy has been the expulsion to Myanmar of two batches of Rohingya refugees in the face of a grave risk of persecution in the country they had fled. By conducting this act of “refoulement”—a violation of international law, of which India claims to be a custodian—the government has betrayed India’s millennial traditions of hospitality to strangers.

Jews came to India as refugees, facing persecution after the demolition of the Jerusalem Temple by the Babylonians in 586 BCE, and in a second wave after the destruction of the Second Temple in 70 CE. They were accepted without cavil by the people of Kerala. The famous copper plates of King Bhaskara Ravi Varma specify the rights of the Jewish community. India was the only place in the world where the Jewish diaspora did not suffer a single incident of anti-Semitism. Oral legend has it that when St Thomas the Apostle landed in Kerala around 52 CE, he was welcomed on shore by a flute-playing Jewish girl. 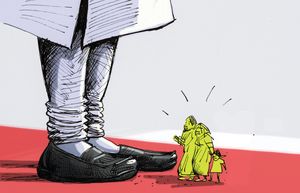 Indeed, so famed was our reputation as a land of asylum, that a defeated Cleopatra sent her son to the safety of India’s west coast, before killing herself. Alas, her son made the fatal mistake of turning back midway to stake his claim to the throne, and met with a gory end.

The Zoroastrians, who faced religious persecution in Persia at the hands of Muslim rulers in the eight century, fled to India and became part of our land as the “Parsi community”. There is a lovely story of a Gujarati king sending an envoy to the captain of the Parsi flotilla, to tell him that there was no room for them. It is said that since the two sides had no language in common, the envoy called for a tumbler of water and dropped a stone in it; the water promptly overflowed, showing what would happen if the refugees were admitted. The Parsi captain understood the message and replied eloquently: he called for a glass of milk and carefully stirred a spoonful of sugar into it, to show that the refugees would integrate and only sweeten Gujarat. Impressed, the king offered them sanctuary and land. Ever since, Gujarati has been the mother-tongue of the Zoroastrian community in India.

In fact, sympathy for refugees is deeply embedded in the Indian psyche. Our great epics, the Ramayana and the Mahabharata, both dwell upon the injustice of the protagonists being forced into exile, and extol the nobility of extending support and succour to those seeking refuge. One of our most popular festivals, Diwali, celebrates a homecoming of refugees after fourteen years of exile.

In 1959, India embraced a lakh Tibetan refugees who fled their homeland with the Dalai Lama. In 1971, we saw the single largest refugee crisis in human history, when 10 million refugees from East Pakistan fled to India, to escape genocide at the hands of Pakistani Army. We provided them refuge, till Bangladesh was born and most returned home. The civil wars in Sri Lanka and Nepal created similar refugee influxes, as more than a lakh Sri Lankan Tamils, and an estimated one-third of the Nepali population fled to India. The invasion of Afghanistan by the Soviet Union in 1979, saw a stream of Afghan refugees entering our country. We did not stop them, and many still remain in India because of the crisis in their homeland.

Given this history, India ought to be a natural world leader on the question of refugee rights. However, our present actions and our lack of a legal framework do our heritage no credit, shame us in the eyes of the world, and fail to match up to our actual past track record.

We can, and must, do better. India must enact a national asylum law, such as the one I have been demanding for years in Parliament. We should be among the most admired nations in the world, not one that, on refugee issues, is increasingly in the global doghouse.