People ate them during the bad times and worked hard

There ain't no such thing as a free lunch,” say economists. No one offers anything free for an entry pass into heaven, they say. There are hidden costs behind any good or service offered free.

The saying originated in 19th century America (where else do you get a double negative?) where saloons offered free lunches to tipplers. They made the food so salty that customers ended up buying more and more beer. Yet, folks fall for things free—from toothpastes that offer a quarter of the tube free to motor cars that offer five or six services free, or shirts that are offered one free with one paid for.

Wine shops licensed by Delhi’s Aam Aadmi government a few months ago offered one bottle free with one that you bought. Too good to last. Within months, the Central government, killjoys, cancelled the licences, got the shops shut, and slapped cases against a minister. Instead, they opened sarkari wine shops that look like greasy garages, and sell some concoctions that taste like Socrates’s last drink. 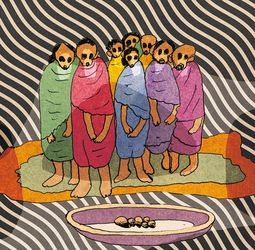 Let us leave the drinks alone and talk food. The problem with economists is that they look even a gift horse in the mouth. They don’t know, there still are free lunches in this big bad world. Go to a gurdwara langar, and you will know why you don’t find people begging for food on Punjab streets.

India has been running the world’s largest langar, so to speak, for the past nearly three years. Didn’t know? Hold on.

India had been giving cheap food grain to its poor since 2013, when Manmohan Singh got the National Food Security Act enacted, and made food a basic right. He sold coarse grains at 11 to 13 a kilo to about 80 crore ration card-holding poor. It is another matter that he still did not win the 2014 election.

Narendra Modi, who came to rule in 2014, continued with the scheme. When the Covid pandemic broke out, and millions lost jobs and fled the towns, he found that giving cheap grain was not enough. For two reasons. One, most of those who were buying those grains had no money now; two, since most had their ration cards specific to their places of work, they could not get the cheap grain in their villages even if they had money. So in 2020, Modi launched his Pradhan Mantri Garib Kalyan Anna Yojana by which all the 80 crore-odd poor (plus or minus a few thousands here and there) were offered free grain over and above Manmohan Singh’s cheap grain.

In other words, most of the poor were enjoying free lunches and cheap dinners through these difficult days. But things were getting too complicated for government’s accountants with subsidies under several heads. So now the government has come up with a bright idea to kill several subsidies with one. It has stopped the free grain under PMGKAY, but made the earlier scheme of cheap grain fully free to beneficiaries of both. In other words, there will be no cheap lunches, but only free lunches.

Accountants are happy, but economists are seething in anger. They say, free lunches may be good politics, but bad economics. Meaning, you might win votes with free lunches, but it will ruin the economy. It will kill enterprise, make people lazy, and turn them perennial seekers of manna from heaven.

But look at what happened during the three years when the government gave free grain. People ate full lunches and dinners, stayed healthy, worked harder whenever they could, produced more, got the granaries full and overflowing, and ran the factories full time. No wonder, the Indian economy is doing better than many other.

Is it bad economics? Then you don’t know Adam from Smith.