Arvind Kejriwal's problem is not money. He wants an ideology

Kejriwal is moving towards identity or majoritarian right. Will it work in Gujarat?

Arvind Kejriwal has found a way to save the rupee—print images of Gods Ganesha or Lakshmi on the notes. If Islamic Indonesia can print a Ganesha image on their 20,000-rupee note, why can't Hindu-majority India? he asks. By Mammon and Kubera! So, the US dollar is staying strong not because of all the gold in Fort Knox, but because every bill or coin bears the words “In God we trust”.

The divine dollar didn't give the million-rupee idea to Kejriwal. My guess is, the streetsmart CM got it from the well-swept streets of Delhi. Delhi's home-owners place pictures of gods on their street walls and in staircase corners so as to prevent them from being defiled with paan-spit and worse. The trick works better than statutory warnings and Swachch Bharat messages.

But what works for street walls and corridor corners need not work for currency notes. Any money-changer in Daryaganj would tell you that Indonesia's Ganesha-guarded 20,000 rupee is worth only 106 Gandhi-headed, RBI governor-guaranteed, Indian rupees. 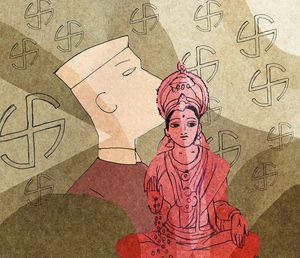 Kejriwal may not know this, but his idea had been tried by a few mediaeval kings. Two were Muslim. Akbar minted coins that showed Ram and Sita. The other—now Kejriwal should be kicking himself—was Muhammad Ghori, that Afghan who defeated Delhi's last Hindu king Prithviraj and, going by Rajput folklore, gouged out his eyes. Before seating his ex-slave Qutbuddin Aibak on the throne of Delhi, Ghori issued coins showing Goddess Lakshmi. Pray, should Modi's mint of 2022 be doing what Ghori's mint did in 1192?

Kejriwal's problem is not money. He wants an ideology.

All parties have an ideology—left, right, centrist, sectarian, nationalistic, etc—or a regional identity. To that extent, the AAP has not been a 'political' party, but a 'civic' party. It practises not politics, but civics—especially the civics of what citizens ought to get from the state, and ought to give the state.

This worked in the middle-class civic polity of Delhi, where civic problems are more pronounced in electoral discourse than are political issues. Breaking out into Punjab and now Gujarat, Kejriwal needs an ideological identity.

Which to choose? Not leftist. In the binary of society versus individual, the leftists lean towards society. The AAP is individual or citizen-oriented.

Not rightist. With no economic philosophy, the AAP cannot be economic rightists like the British Tories, the US Republicans or the defunct Swatantra.

Then there are the sectarian rightists who espouse identity nationalism—the BJP, the UK Independents, France's National Rally et al.

While not being any, the AAP carries elements of all. It believes in the left's welfare policies, by which the state distributes largesse to the citizens (not necessarily to society). The free power, water, schools, transport and clinics are all largesses given away by a left-leaning administration to its citizens.

Flip the coin and you find elements of classical rightism in the AAP's inclination towards individual rights. Its espousal of the right to information demanded of a state that withholds it, and its campaign against the bribe-taking clerkdom have all been rightist causes.

Finally, Kejriwal is choosing the third. He is moving towards the identity or majoritarian right. He has sacked a god-defiling minister, openly recites Hanuman chalisa, claims to share his birthday with Lord Krishna, pays for pilgrims on progress, makes a replica Ram temple in Delhi, and is now seeking gods on dimes in dozens.

The million-rupee question is: Will these work in Gujarat?