Count the Gurkhas in for Agnipath

Nepal earns 4,200 crore a year as pay, pension from India

The fiery protests against Agnipath have died down. Prospective Agniveers are no longer torching rail locos and buses, but filling up recruitment forms and doing push-ups for physical prowess tests. Once recruited, each one will try to outdo three of his buddies so that, after the fourth year, he will be among the one-fourth who will serve for a decade and half more, and retire with a lifelong pension and perks. All the very best!

What would the three losers do? They would go home with a purse of nearly Rs12 lakh each, plus all of what they would have saved from their monthly pay. They also have the promise of preference in police and PSU jobs, and of bank loans to start garages, gadget repair shops, or small factories. All the best! 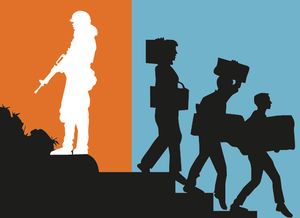 Old fauji families that have been sending their sons in thousands for naam, namak and nishan are miffed, but have accepted fait accompli. After all, a job for four years is better than no job for many years. Hope for the best.

Now, a new worry has come up in the strategic circles. What will the Gurkhas from Nepal do? Sending their sons to serve in the Indian Army is a 200-year-old tradition for the Gurkhas. The Anglo-Gurkha wars of 1814 and 1816 ended with the antagonists turning admirers of each other's gallantry and sense of honour. The winners refused to accept the losers' flags and guns in customary surrender. Together, they built memorials for the fallen on both sides. They did not part as friends, but stayed together as friends. The British took the Gurkhas into the Indian Army, the Indians welcomed their brothers from the hills, and the Gurkhas joined for good pay, promises of honour and prospects of adventure.

At partition, most Gurkhas opted for India; a few to continue to serve the British crown. The British still take 200 Gurkhas every year for their own army and the Singapore Police. India takes about 1,300 (60 per cent of them from Nepal, the rest from India) to fill the vacancies in the 40-odd battalions who have given lives in thousands and taken lives in thousands for India.

All this will continue, assures the government. The Gurkhas will continue to be recruited as they used to be. One-fourth of them will be allowed to stay back and serve, and three-fourths will get the Rs12 lakh purse after four years.

The worry is on three counts. One, with fewer job slots and business prospects than in India, what would the Nepal-native Gurkhas do with the Rs12 lakh? Will they, too, get bank loans, police and PSU jobs in India?

Two, Nepal is earning about Rs4,200 crore a year from the pay and pension of the serving and retired Nepal-domicile Gurkhas. That is little less than Nepal's defence budget. What would Nepal do once the pension remittances dry up?

Three, the 17 lakh Indian Army veteran and dependent population form a large constituency among the Nepal populace that has kept the country India-friendly, even rejecting the tempting apples being offered by China. Are we ready to risk this goodwill from Nepal, a country that Narendra Modi visited five times in eight years?

Tailpiece: The Gurkhas fight without rancour. The British learnt it in the first Gurkha war. While cannonading the Gurkha fort of Kallunga, they were surprised to see a door opening slightly. A man emerged waving a white flag. The commander, thinking it as the first surrender, ordered to hold fire.

The man walked into the British camp and asked the surgeon to repair his broken jaw. The job done, he gave a grin of gratitude and walked back saying, Let me join my buddies; they wouldn't like it if I hold up the battle for long.