R. Prasannan on India's aid to Sri Lanka and the visible difference this time around

Beneficiaries of India's largesse now are the people of Sri Lanka, not the rulers

Young Namal meant well. Read the full text of his tweet: "Grateful to PM Narendra Modi, Hon CM MK Stalin & the people of India for the aid & essential items sent to LKA. India certainly has been a big brother & a good friend to LKA throughout the years, something that we will never forget! Thank you."

All the same, linguists would wish he had opted for a better phrase than big brother. Big brother, for them, is a bully. A loving and caring senior sibling, whom we call bada bhai or anna, is elder brother or older brother. 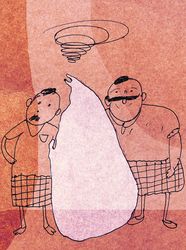 Blame Eric Blair, that India-born British author better known as George Orwell, for giving big brother a bad name in popular semantics. In his dystopian classic, Nineteen Eighty-Four, Orwell used the phrase to portray a totalitarian state. He composed the famous line “Big brother is watching you” to talk about a state where the citizens are under constant surveillance, as they are said to be in these Pegasus days. In geopolitics, the term denotes a regional hegemon, or a local bully. Let's admit, several Lankan leaders have been using it in that sense against India.

Not this time. Namal meant that India has been like a loving and caring older brother to Lanka, in need, in deed and indeed. We have seen this in action several times—when Indira Gandhi sent troops to help Sirimavo Bandaranaike hunt down the communist Janatha Vimukthi Peramuna insurrectionists in 1971; when Rajiv Gandhi dropped food and medicines from IAF planes for the besieged Jaffna residents in 1987; when he sent the Indian Army a few weeks later to keep peace between the Lankan troops and the Tigers, but ended up waging a war; when Manmohan Singh sent food, medicines, clothes and tents to the tsunami-hit Lankan shores in 2004; and now when Modi is giving food, fuel and credit worth about $4 billion to the bankrupted country.

But there has been a difference in these reachouts. The aid given in the earlier Indira-Rajiv era was big brotherly; the aid being given now in the Manmohan Singh-Narendra Modi era has been elder brotherly.

The difference is not just in the nature of the aid and the manner in which it is given, but also in the recipients of the aid. Indira and Rajiv gave military aid. Indeed the troops landed on invitation from the legitimate regimes in Colombo, but the fact remains that their two interventions were muscular. Rajiv's food drop on the northern peninsula (Op Poomalai), though a humanitarian gesture towards the Vanni people who were besieged in the civil war, was also a muscular act. He was defying the regime in Colombo. In all those interventions, India was playing the big brother.

Not so in the recent aid despatches. As Lanka and the entire Indian Ocean littoral lay reeling under the tsunami waves in 2004, Manmohan Singh's India stood up saying, “Main hoon, na?” and sent planeloads and shiploads of aid. Now when Lanka has become bankrupt and its millions are crying for food, funds and fuel, Modi has opened up India's granaries, coffers and fuel reserves to them.