A mysterious hand, with no body attached, appears at the feast of King Belshazzar in an Old Testament story in the Book of Daniel. It writes three or four code words on the walls of the banquet hall. Wise man Daniel interprets the words as a prophesy about the downfall of the Babylonian empire.

It is logical to believe that Belshazzar ran an ancient Bletchely Park, and that Daniel was its head. Bletchley Park in London, if you don't know, was the world's most secretive hub of code-breakers who were employed by the British war office for breaking German submarine codes during the Second World War—geniuses who played the greatest ever games in cipher mathematics.

Mathematics is all about logic. What defies logic here is why God used coded language if He wanted to warn the wayward Belshazzar about the impending doom. That is the problem with God in all religions. He does not talk straight—in any religion or any language. We have to read his mind through omens and oracles! But then, who are we mortals to question the wisdom of God? If He loves theatrics, or leela as we call it, so be it.

Anyway, ever since this eerie biblical incident, rulers have dreaded writings on the wall. And dissidents, secessionists and anarchists have been resorting to them to spread their message and to warn rulers. 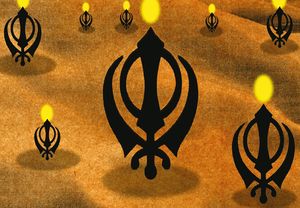 One such graffiti appeared on the Himachal legislature's summer assembly building a few nights ago. The writing, in Gurumukhi, read the dreaded word 'Khalistan'. As if to provide a clue to sleuths who cannot read Gurumukhi, the writers had also planted a few Khalistani flags on the building's gate. Sweet of them, don't you think? Sending a coded message and providing the key to the code?

The sight of the graffiti and the flags sent our sleuths and spies on a tizzy. Rightly so. It is their job to find out whether the old Khalistan movement is raising its head again, or whether the graffiti was just some pranksters' job. It could very well be the latter.

The sleuths are quietly on their job, but several of our politicos have jumped the gun. They have concluded that there is a serious threat from secessionists, and have accused each other of being soft to secessionists.

This tendency to see the Khalistan bogey has been on the rise of late. When Sikh farmers protested, many in the BJP called them Khalistanis. When a few protesters raised a Khalsa flag on a pole in the Red Fort, it was misread as a Khalistani flag.

Ladies and gentlemen, rest assured. Every graffiti is not sedition rendered in script. After all, we are a country that has more writings on toilet walls and monument stones than on classroom blackboards. The Khalistan cause is dead and buried long ago. Its ghost may be kept alive by fringe groups like the Sikhs for Justice, but today it is more of a bogey than a menace. A graffiti here or a flag there cannot bring the ghost back to life. But loose political talk can. Name-calling can hurt sentiments, and fringe groups are waiting for feelings of hurt to accumulate.

Perhaps it is time for the Prime Minister to intervene and cut the talk. He has been reaching out to the Sikhs by withdrawing the farm laws that hurt them, celebrating the parkash purabs of Sikh gurus, hosting Sikh delegations in his home, and even getting the names of several Sikhs deleted from the blacklists of Khalistani suspects.

Now it is time for a political effort. How about calling a meeting of party leaders, and making a fervent appeal not to utter the K-word for a while?