R. Prasannan on Modi's guru dakshina from the Red Fort

Narendra Modi has done something that has gratified the writer and readers of this column. He paid homage to the ninth Sikh guru, Tegh Bahadur, on his 400th birth anniversary. A gesture of this kind was suggested in this column in end 2020.

Indeed, when Modi did it, he did it with a flourish and style that was beyond the wildest fancy of a poor columnist. He made a speech honouring the guru, well after nightfall last Thursday from the Red Fort. 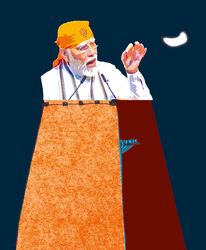 More about the trivia later. Let us first examine when and why this column had suggested such a gesture of gurutva.

The year 2020, if you recall, had been an annus horribilis for Modi, and for the millions of us who inhabit India that is Bharat. The year had started with street protests over the citizenship law, and ended with protests against the farm laws. In between there were riots in Delhi, a raging pandemic, a social lockdown, an economic slowdown, town workers fleeing, Sushant Rajput dead, two typhoons, two assembly elections, one flood, a few fires, the Chinese in Galwan and a lot more to mourn over. No cinemas, no fat weddings, no dining out, no foreign tours.

Adversity brought out the worst in several of Modi's partymen. In their anxiety to show their loyalty, they called the protesting Sikh farmers Khalistanis, non-Sikh protesters Maoists, and other dissenters urban Naxals, and even got the police to slap sedition cases on them. The Sikh psyche, which had long ago recovered from the Blue Star wounds, was hurt again.

Modi tried to make amends with a year-end prayer at Gurdwara Rakabganj “where the pious body of Sri Guru Tegh Bahadur Ji was cremated”, but even that failed to mollify the Sikhs. This column then expressed a fond hope—that better sense would prevail on all, and that the year of the 400th Parkash Parv of Guru Tegh Bahadur would be an annus mirabilis.

Now let us look at the trivia that are tickling most people. Modi addressing the nation after nightfall is nothing new. Remember, he woke us up one night from television screens and told us that some of our hard-earned rupees didn't count? But as the officials claim, this is indeed the first time that a PM has addressed the people after nightfall from the Red Fort. But then, Modi didn't climb the ramparts of the fort, as PMs do every I-Day, to make this speech. This one was rendered from a makeshift stage on the fort's lawns.

Another claim is that this is the first time a PM addressed the nation from the fort on a day that is not the I-Day. Not true. When confronted with crises and cornered by dissidents, Narasimha Rao once called a meeting of his partymen on the Red Fort lawns, and gave a torrid speech one hot summer afternoon. The speech earned him more enemies. Who would like to be made to sit on a treeless lawn in the scorching summer sun, and listen to an hour-long lecture on cares of governance?

Tailpiece: Jawaharlal Nehru did not make his first address to the nation from the Red Fort ramparts on August 15, 1947. The August 15 morning was spent on swearing-in of the governor-general and the ministers, and a meeting of the Constituent Assembly. Nehru made the first Red Fort speech on August 16, 1947. Since 1948, PMs have been making the Red Fort address on August 15.