Madeline Albright was the mother of all sanctions, writes R. Prasannan

She warned others against 'walking away with contracts' with India

Madeline Albright passed away, unmourned in India. No surprise. No American has hurt us more than she did, save Richard Nixon and Henry Kissinger who sent nuclear warships to threaten us in 1971.

Albright, America's first female secretary of state, fretted, fumed and fulminated when Atal Bihari Vajpayee tested the atom bomb in 1998; she called it “a felony against the future”. Dubbing us “reckless, rash, unjustified, wrong-headed, unwise”, she imposed sanctions, and warned the other rulers of the universe against “walking away with contracts” with India. 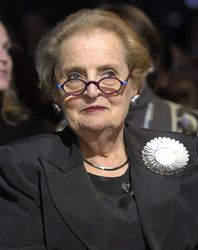 Albright's antipathy was not a fallout of our bomb test, which shocked the Bill Clinton regime and shamed its CIA spies no end. It was inherited. Her father Josef Korbel, a Czech diplomat, had failed as head of a UN mission sent to broker peace between India and Pakistan soon after the first Kashmir war. Nehru was so outraged by his Pakistan bias that he called Korbel's approach to Kashmir as treating “the thief and owner of the house as equals”. Later Korbel wrote a book, Danger in Kashmir.

The daughter started her secretaryship by asking Inder Kumar Gujral to sign the test ban treaty. But where is your signature, asked good man Gujral, knowing well that it was a treaty which the US had refused to ratify! In effect she was telling us—the treaty is not good for America, but it is good for lesser people like you. Gujral ignored her gospels.

Then Vajpayee tested the bomb. Caught off her CIA guard, Madeline turned into the high priestess of non-proliferation, cursed us with bell, book, candle and sanctions, and asked us to sign the non-proliferation treaty as a non-weapon state. Take a walk, we told her.

Leaving south Asia to the milder deputy secretary Strobe Talbott, Madeline walked around the Balkans and eastern Europe. The world is paying the price for it today.

As discussed in this column a month ago, the Russians thought they had done a good thing to Europe by disbanding the Warsaw Pact, the military alliance they had had with the East Europeans during the Cold War. In return, they expected the west to disband the NATO, going by the gentleman's word that George Bush Sr's secretary of state James Baker had given Mikhail Gorbachev. But urged by Albright, and much against the advice of even Kissinger and her own mentor Zbigniew Brzezinski, the NATO cheated. They not only refused to disband, but roped in Russia's old allies Poland, Hungary and the Czech Republic, took troops and tanks to Russia's doorstep, and then launched the NATO's first war by bombing Belgrade.

Cold War legend has it that Russia's prime minister Yevgeny Primakov heard of the bombing while flying to Washington for talks with Clinton and Albright. Feeling cheated, he ordered his pilot to turn back. Since known as the Primakov loop, it is considered the moment when east-west detente broke down and Cold War II began.

Following in Primakov's footsteps, Vladimir Putin has been warning the NATO against further expansion. Ukraine's application for membership was the last straw on the Russian bear's back. The rest is last month's history, a tragic fallout of Madeline's follies.

TAILPIECE: ASEAN foreign ministers' meetings end with a fun night. At the 1998 Manila meeting, Albright teamed up with Primakov, then foreign minister, in an East-West love story skit. Wearing an embroidered barong blouse and a big flower on her hair, Madeline sang, “I want to know what you think of me.” Primakov, wearing a sailor's shirt and cap, crooned back, “Look in your file at the KGB.”