A soldier in uniform drinking a toast to the president sitting down? Tauba, tauba; height of disloyalty! But they do it on board our naval ships, because a king of England had permitted them.

Maroon may look a girlish colour, but our macho paracommandos would not trade their maroon caps even for a crown jewel. They got the cap as a gift from novelist Daphne du Maurier, wife of Frederick Browning who raised the first airborne division. She stitched the caps to boost their morale, after they suffered a setback in North Africa.

The Rajaputana Rifles have the Maltese Cross on the crest. It came to them through a British regiment that had links to the knights of Malta. The Madras Regiment sports the elephant crest gifted by Arthur Wellesley after defeating the Marathas at Assaye. 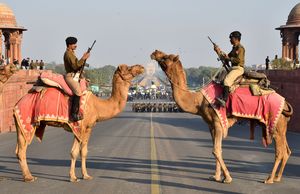 The Grenadiers’ badge bears the White Horse of Hanover. The naval ensign keeps the red cross of England’s patron saint, St George, as a symbol of association with other Commonwealth navies. Madras Sappers wear a dupata which reminds them of their valour under Charles Napier, that rascal who sent the famous ‘Peccavi’ or ‘I have sinned’ message after conquering Sindh.

Impressed by their valour against the Baluchis, a British regiment gifted their shakos which the Thambis adopted as their headgear and called them dupatas.

Spotting a piper playing loud to boost the troops’ morale, Eyre Coote cried in the heat of a battle against Hyder Ali in 1781: “My brave fellow, you shall have silver pipes when the battle is over.” An armoured regiment still carries those silver pipes, gifted to them by Coote who had been Robert Clive’s deputy at Plassey.

Colonial vestiges? Maybe to us, who are untutored in military history. For the soldier, however, those are but prized possessions and sacred traditions, fondly polished and proudly preserved over centuries. There are hundreds like these (THE WEEK had compiled them in a cover story in 2001). It is these customs and traditions, strange to the civilian but solemn to the soldier, that fires the regimental spirit in him and sends him charging in the face of the enemy.

Let’s admit it—the soldier in the battlefield fights for himself, his buddies, his company, his paltan, his regiment. The honour of these abstractions are ideogrammed on every inch of his ceremonial uniform, and etched in his mind through the little rituals of ceremonies, the steps of his march (rifle and light regiments have brisker paces of march) and the varying notes of music.

One such sacred note has now been jarred in the name of severance from colonial ties. 'Abide with Me', a hymn that appealed even to the great soul who sent the empire packing, shall no longer be played at Beating Retreat, the world’s most splendid military music show.

Tailpiece: There are three stories about the origin of the naval toast. Once King George IV was treated to dinner on board. As the officers rose to call the toast, the king said: “Gentlemen, pray be seated. Your loyalty is beyond suspicion.” Another is that King William IV hit his head against the low ceiling on board, and decreed sitting toasts. A third tale has its origin in the Glorious Revolution. Officers loyal to the dethroned James II used to take their pistols to the mess and sit on them to prevent them from being snatched by the loyalists of Mary and William of Orange.