India got a BrahMos order from Philippines. Is Vietnam next, asks R. Prasannan

Writing about Delhi’s crazy cocktail circuit once, I described an arty-farty party where I had seen a lanky wine-drunk lady lighting a huge Havana. “She lit a miniature Tomahawk,” I wrote.

A day later, I got a call from India’s second-most famous missile scientist (after you-know-who) Dr A. Sivathanu Pillai. “I liked your article. But why did you compare the cigar to a Tomahawk?”

“Why not?” I countered. “It looked ludicrous.”

To my Hollywood-dulled mind, it had looked even grotesque. As grotesque as it would have been, if Audrey Hepburn had been shown in that iconic poster of Breakfast at Tiffany’s holding a huge Havana, instead of a cigarette in an elegantly slim holder. But since I did not want to discuss Hollywood posters with a missile scientist, I said sheepishly: “Isn’t Tomahawk the most famous cruise missile?”

“It is, because people like you make it famous. You should have likened the cigar to BrahMos.” 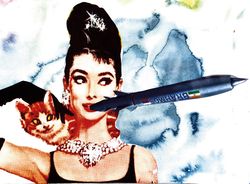 Coming from the father of BrahMos, it struck me like a homing missile. I had known enough about BrahMos as the fastest, smartest and the only supersonic cruise missile in the world, before which the Tomahawk was like an Ambassador before a Maybach. I had known that unlike the MiGs or the Jaguars, BrahMos was not a designed-abroad and made-in-India product.

It had been developed by the finest missile minds of India and Russia, who had joined hands, formed a consortium, compared notes, exchanged ideas, built teams, met challenges, faced failures, shared blames, and toasted successes together. I had also known that BrahMos was the only cruise missile in the world that could be launched from land to land, land to ship, ship to ship, ship to land, submarine to land, submarine to ship, airplane to land, and airplane to ship.

Yet why did it not come to my dull mind when I was looking for a missile metaphor? Simple: I was suffering from a mind block from which India’s political class, military brass, diplomatic corps, bureaucratic babus and media hacks had been suffering—a mulish refusal to look at India as a builder of big arms.

The biggest success of BrahMos over the last two decades has been in breaking this mind block. Not only have Pillai and his successors Sudhir Mishra and Atul Rane built the world’s most versatile missile, but also convinced the netas, the babus, the brass hats and the hacks that BrahMos packs the most precise and powerful punch ever packed into a cruise missile; and that any general, admiral or air marshal in the world would give his right arm to lay his hands (pardon the mixed metaphor) on a battery of BrahMos.

An early convert to their line of thinking was Prime Minister Narendra Modi. In his first outing as PM in 2014, Modi had landed on the deck of INS Vikramaditya, and told the commanders of the three services about the need for arms-buying India to sell arms.

We may be the world’s most valued arms buyer, but as a seller we are small fry hawking nothing more lethal than pistols, rifles, radar parts, avionics consoles, airplane doors, and at the most a few unarmed Dhruv helicopters and an offshore patrol vessel once in a while. From all these we earned Rs10,000 crore last year—small change in the big bad market of military arms! In the sellers’ market we are like a street hawker sitting outside Harrods.

All that may be changing. Last week, India received an order from the Philippines for three batteries of BrahMos—the first order that India has ever received for a big-ticket weapon. Next may be from Vietnam.

Time to knock at the doors of Harrods?