Bhutan has been a friend in need, in deed and indeed: R. Prasannan

All the dragon king’s subjects, the world’s happiest people, have been immunised against Covid-19. Every adult in Bhutan has got both the vaccine shots. Part of the credit goes to prime minister Narendra Modi. He had sent to Bhutan the very first consignment of India’s vaccine gifts.

Bhutan is now giving the return gift, honouring Modi with their highest honour, Ngadag Pel gi Khorlo. The Buddhist country’s prime minister Lotay Tshering has described Modi as a “spiritual human being,” and tweeted that he looks forward to “celebrating the honour in person.”

The prayer wheel is coming full circle. Modi, if you recall, had launched himself into the larger world with a visit to Bhutan in 2014. He has since been spinning around the world like Phileas Fogg in Around the World in Eighty Days or MGR in Ulagam Sutrum Valiban, harvesting honours from governments and non-government bodies. Afghanistan’s Amir Abdulla Khan Award, Bahrain’s King Hamad Order of the Renaissance, the Maldives’ Rule of Nishan Izzuddeen, Palestine’s Grand Collar of the State, Russia’s Order of Saint Andrew the Apostle, Saudi Arabia’s Order of Abdulaziz Al Saud, and the UAE’s Order of Zayed—to list a few state medals that crown the ribbons on his self-acclaimed 56-inch chest. Now comes the one from Bhutan. 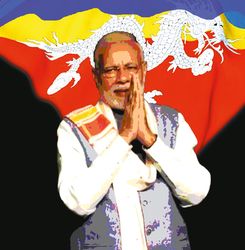 Bhutan has been the neighbour with which India has had the least problems—a friend in need, in deed, and indeed. Look at others. China and Pakistan have waged wars with us; Myanmar is mostly behind a Burma teak curtain; Sri Lanka is overtly friendly, but knows how to tickle our feet and draw us out into self-defeating peace-keeping wars; Nepal sits on our head like a crown, but pulls at our ears at times; Bangladesh and the Maldives blow hot and cold depending on whom they had elected in the last election. The Afghans are good pals, but perennially in trouble. No wonder Modi exclaimed during his 2019 visit to Thimpu, “Who won’t want a friend and a neighbour like Bhutan?”

There have been hiccups, but natural between friends. Bhutan was miffed after Manmohan Singh withdrew cooking gas and kerosene subsidies in 2013, apparently to arm-twist them from reaching out to China. Modi’s 2014 visit repaired much of the damage, and Bhutan has since scrupulously toed the Indian line, keeping off Xi Jinping’s belt-and-road jamborees attended by most of the world.

When the Chinese tried to build a road in 2017 through Bhutan’s land towards the Chumbi Valley from where they could threaten our chicken-neck link to the northeast, Bhutan let India put its booted foot down in Doklam. What more can a little neighbour give?

Happy New Year to all the happy people!

Tailpiece: Jawaharlal Nehru rode a mule, a yak and a pony for five days through the Chumbi Valley in 1958 on his first state visit to Bhutan, which had no airfield.

Bhutan invited a media delegation two years later. Eminent journalist B.G. Verghese has recorded that when they crossed the Paro bridge, a welcome band played Auld Lang Syne. Forgetting that they were the guests, the journalists instinctively jumped off the mules to take photos of a state ceremony, leaving a string of mules to amble into the governor’s welcome party.