Our poor diplomats are in a tizzy because of AUKUS shock: R. Prasannan

Edward Behr heard a fellow scribe shout across a refugee camp in war-torn Congo in 1960: “Anyone here been raped and speaks English?” That became the title of his 1978 memoir, an account of crass war reporting in English.

Joe Biden’s AUKUS venture seems to be the outcome of some such shout across the Indo-Pacific—anyone here been bullied by China and speaks English? How else do you explain his strange rendezvous with Australia, a country that makes most of its money by trading with the Chinese, and with Britain who had been missing from these parts since 1972 and is coming back with an aircraft carrier to fish in the troubled eastern waters? The threesome have sailed into the Indo-Pacific and tied their huge AUKUS nuclear submarine to the starboard side of the jolly boat called Quad. Now the Quad, with Narendra Modi and Yoshihide Suga also on board, finds itself boxed in. 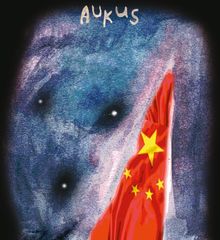 The only explanation for the strange behaviour is that the old man in the White House may be suffering from some sort of Afghan withdrawal syndrome. He is showing what clinicians call delirium tremens, a rapid onset of confusion. In the process, he is spreading confusion all around.

Forget the French. They are enraged over losing a good submarine deal with the Aussies. Biden has left even the sober Modi’s diplomats confounded. Look at our poor foreign secretary Harsh Vardhan Shringla. He got tied up in knots when asked how the AUKUS sub got anchored on the side of the QUAD. The QUAD, he said, is a plurilateral grouping (a term invented during the early days of the WTO and quickly forgotten) “of countries that have a shared vision of their attributes and values” and “a shared vision of the Indo-Pacific... as a free, open, transparent [and] inclusive [region].” The QUAD does everything from “dealing with the Covid-19 pandemic” and “supply[ing]...vaccines” to “working on new and emerging technologies” and dealing with “climate change, infrastructure, maritime security, education, humanitarian assistance and disaster relief.”

In short, the foursome will do everything except what we had supposed they would do—take on China. Pray, are the chaps in Beijing getting cheesed off with these boy-scouts who are running around with vaccines, getting kids to schools and distributing food and blankets in refugee camps?

And AUKUS? Well, that, according to Shringla, “is a security alliance between three countries. We are not party to this alliance.” Of course, sir. If we were a party, it would have been called AUKIUS.

Let us spare our poor diplomats. They are in a tizzy because the AUKUS shock was delivered only a week prior to the Quad’s first in-person meeting for which they had been getting their English composition (as Pervez Musharraf once mocked at meaningless diplomatic joint statements) ready. The poor souls had to rework it all and save four faces.

Karl Marx—it is a fashion to denounce him these days—said, history repeats itself, first as tragedy, second as farce. Dead right! Dealing with America was a farce when it was ruled by Donald Trump. Dealing with America is becoming a tragedy when it is being ruled by Biden, a guy who naively surrendered Afghanistan back to the Taliban when he was winning the war. Are we counting on him to take the lead in keeping the dragon behind the Great Wall?

Good people, we are on our own! America’s business, as Calvin Coolidge said, is business. Biden will do it with Beijing too, if the bucks are good. Even with the Taliban, for thirty or more silvers. Don’t take my word; ask Ashraf Ghani.