Teddy Roosevelt refused to shoot a bear cub on a weekend hunt, and famously lent his name to a cuddly toy. That was perhaps the world’s most loved doll till that anorexic Barbie arrived with her toiletry and lingerie, corrupting the minds of our chubby cuties. No wonder, Vladimir Putin banned Barbie in Russia.

Putin himself is a dear doll. He figures as the smallest doll (or the largest, depending on whether the dolls are in descending or ascending chronological order) in the hundreds of matryoshka sets sold on Moscow streets, along with his predecessors Medvedev, Yeltsin, Gorbachev, Chernenko, Andropov, Brezhnev, Khrushchev, Stalin and Lenin. 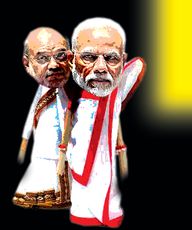 Now Narendra Modi is talking kids’ stuff. Critics may carp at his governance as kindergarten style, but believe me, Modi is toying with the idea of making India a toy power. Toddlers and their toys, boys and their games, girls and their dolls, as also traditional toycraft and craftsmen, figure frequently in his monthly Mann Ki Baat musings.

No kidding, cuties and brats, ladies and gentlemen! Modi means business—his government has held two toy events in the last four months. More than 1,000 virtual stalls were set up at the Toy Fair in February, and state governments held webinars on various local toycrafts. At last month’s Toycathon, thousands of craftsmen and whiz-kids were asked to fashion new toys inspired by native traditions and ancient wisdom that would fight off the mlechha influence of GI Joes.

Indeed, Modi isn’t planning to ban Teddies or Barbies, but he wants to make India atmanirbhar in toys. The global toy market is about $100 billion, but as Modi mourned at the Toycathon, India’s share is only around $1.5 billion. Worse, “we import about 80 per cent of our toys,” and worse still (which he didn’t say), 70 per cent of this 80 per cent come from China.

Well, that isn’t any tin soldier attack like the one we faced in Galwan last year, but a toy army invasion.

Nirmala Sitharaman tried to checkmate the Chinese by hiking import duty on toys to 60 per cent, but China has been flashing its APTA member card to claim duty discount of 34 per cent on toys. APTA, by the way, is Asia-Pacific Trade Agreement, by which its six signees—Bangladesh, China, India, South Korea, Laos and Sri Lanka—pay less duty on mutual trade.

Indeed, there is no rocket science in toy-making (except in those Diwali rockets from Sivakasi), but there is vedic mathematics in the ones that Modi wants India to make. Toycathon asked innovators to build Monopoly-style board games featuring ayurvedic herbariums, develop mindgames using vedic maths, and build games based on heritage and mythology so as to promote Indian culture. The organisers claim to have received a flood of ideas—about 17,770 for new toys and games from 14,132 teams spread across Bharatvarsh.

Not everything was ancient and sacred. There were also exhortations to develop games based on the Constitution. One doesn’t know if anyone took up the challenge and came up with one on Article 370.

Tailpiece: A doll gifted by a Hungarian diplomat inspired cartoonist Sankar to exhibit the dolls that he had collected on his foreign trips. Friend Jawaharlal Nehru also used to gift toys that he had picked up abroad. Indira Gandhi then told him to set up a museum in Delhi, which president S. Radhakrishnan opened in 1965. Enriched further with dolls gifted by embassies and visiting presidential and prime ministerial spouses, the International Dolls Museum today has more than 6,500 exhibits from 85 countries.