Arjun’s vishad yog has ended. He will ride to battle. The Mahabharat hero was seized by pangs of conscience, when he eyed the phalanx of kinsmen whom he may have to slay. Then Krishna delivered the Gita, and Arjun bucked up to perform his dharma. The rest is epic. Now, Narendra Modi has chanted atmanirbharta to the Army, and new India’s Arjun is battle ready.

Though the term was coined in his second term, Modi had been keen on self-reliance in defence from day one. On his first outing as PM in 2014, he had landed on the deck of an aircraft carrier and talked of India making and exporting arms. As was pointed out in this column then, if the Tajiks or the Turks were to buy Tejas, Modi ought to tell the Air Force and the Navy to fly it first. If he wanted the Argentines to buy Arjun tanks, he should ask our armoured corps to ride them first.

Modi has done that now. He rode an Arjun at Longewala in November. Last Sunday, he handed over an Arjun Mk-1A to Army chief Gen. M.M. Naravane, dedicating “to the country one more warrior to protect our frontiers.”

Like Herbie in The Love Bug, Arjun never had any doubt about own capabilities. Its creators, the DRDO nerds who were building a complex battle tank in a country that had not built even its first motor car, had claimed it was the world’s best tank. If it was not, they could work further on it to make it the best.

It was the charioteers, the armymen who were to ride Arjun, who had doubts, despite every PM since Narasimha Rao asking them to try it out. Rao rode it in 1996 and ‘dedicated’ it to the nation. But the Army took only 120. Atal Bihari Vajpayee got it displayed in the R-Day parade. Manmohan Singh’s defence ministers Pranab Mukherjee and A.K. Antony tried to talk the generals into buying Arjuns in squadrons; Pranab even ‘handed over’ one to Gen. N.C. Vij in 2004. 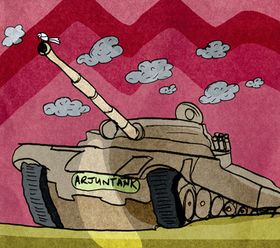 On every one of these occasions, the users publicly praised the tank, talked of the virtues of indigenisation, spelt out the need for self-reliance, and got themselves photographed with the tank. But as soon as the VIP backs were turned, they returned the machines to the workshops, citing inaccuracy of the gun, overheating in the desert, erratic fire control system, poor suspension, unreliable gunner’s sight and so on. By the time the scientists got back after rectifying the flaws, import orders would have gone in hundreds for T-72s and T-90s.

The scientists got so frustrated that Arjun’s creator, DRDO chief M Natarajan, broke into tears in a ministry meeting where snooty generals rubbished the tank. Another time the scientists, alleging sabotage by vested import interests, threatened to insert black box-like bugs in the tank to monitor mischief during user trials.

The Army, too, had its case. The early tanks were too heavy for rail rakes and border bridges to take them. And, while the scientists were taking too long in the labs, newer technologies were coming into the market making Arjun obsolete.

Anyway, all has ended well. And Natarajan, hopefully, is smiling.

Tailpiece: In the 1930s, British PM Stanley Baldwin ordered the Royal Air Force to accept the Hampden, Wellington and Bristol Beaufort warplanes before the prototypes could be tested.

That paid off in the Battle of Britain. When the German bombers came like locusts to bomb Britain into stone age, the RAF pilots met them in more than 10,000 of these rookie planes. That created what Winston Churchill would call “their finest hour”.

Our bravehearts, too, will have their finest hour—when they trust our own wise minds of science.