Why not a jawan-kisan parade?

Narendra Modi missed a golden chance to reach out to the farmers. When they threatened to hold a tractor rally on the Republic Day, Modi should have said—aayiye mere kisan-bhaiyon; miliye aapke jawan beton se, Rajpath pe.

Rendered into plain Hinglish: most welcome, my farmer-brothers; join your soldier-sons on the Rajpath.

That would have been an offer like ‘Godfather’ Vito Corleone’s—one that the other side can’t refuse.

Instead, look at what the government’s babus and sleuths have done. They slapped sedition cases on the farmer leaders. The farmers had better sense. They said they wouldn’t spoil the state show on the Rajpath, but would hold their parade on Delhi’s Ring Road. Yet the state’s vakils went to court, asking the judges what to do. Ask the police, not us—said the judges. 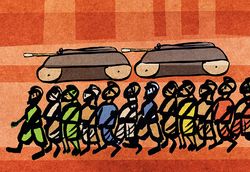 Not that the farmers, who populate the other side of the political Rajpath, would have given up their struggle after a parade, and gone back to their homes, hearths and barns. They would still have sat in siege on Delhi’s borders, insisting on repeal of the farm laws.

All the same, an invite to join on the Rajpath would have taken the sting out of the protest. Indeed, true-blue traditionalists would have said: Tut-tu-tut! Tractors riding alongside tanks? You can’t let a sacred ceremony of the state be soiled by a bunch of rustics riding tractors.

But let us look at the plus side.

As it is, R-Day 2021 is going to be remembered for all the wrong things. A pandemic overhang, smaller crowds, fewer contingents, shorter march and no chief guest. Boris Johnson of Great Britain had agreed to come, but backed off at the last minute citing more and severe covid cases at home. (Not that we haven’t had parades without chief guests. None turned up in 1952, 1953 and 1966 for varying reasons.)

Not that there is nothing new in this year’s parade. There will be Bangladeshi troops marching as a guest-contingent, and there will be the brand new Rafales showing stunts in the sky.

All the same, an invite to the farmers would have made a bigger difference, and made this year’s parade the most cherished one. The charm of the Indian R-Day parade is not just the military and their marching contingents, but also the several tableaux depicting the cultural and ethnic mosaic of India that is Bharat. The sight of a convoy of well-painted tractors, driven by a few colourfully-clad and brightly-turbaned tillers (carefully picked by the parade commanders), would have added to the grandeur of the parade which is billed as the world’s grandest state show.

Two, such a gesture on the government’s part would have been hailed as politically sagacious. As it is, there is much bitterness between the government and the protesters, especially with several ruling party elders calling them Khalistanis and Maoists, and the sleuths slapping sedition cases. An invitation to the farmers to join the parade would have broken the ice, watered down the bitterness, and the talks would have been more cordial.

Wise men in the PMO, please rethink! There are still a few days left for the parade.

Tailpiece: Going by an RSS claim, Jawaharlal Nehru did something like this in 1963. Though his government had once banned the RSS, Nehru was so impressed with their social work in China-threatened Assam during the war of 1962 that he invited them to join the R-Day parade of 1963.

It is another matter that this claim is still not confirmed. The defence ministry has responded to RTI queries on the matter that no record of the composition of the 1963 parade exists!