The bull in Pak’s China shop

An irreparable loss!” Narendra Modi tweeted on the death of Narendra Kumar who “served the nation with exceptional courage and diligence. His special bond with the mountains will be remembered.”

It is rare that the PM condoles over a colonel’s death, but then Narendra Kumar was no ordinary colonel or climber. He was the only colonel who wore a PVSM (usually accorded to generals), a Padma Shri, a Kirti Chakra, an AVSM, an Arjuna Award, the Mountaineering Federation’s Gold Medal, and finally the MacGregor Medal (see Tailpiece) worn once by legends like Francis Younghusband who had hoofed it over the Himalayas and invaded Tibet.

Kumar joined the military academy in 1950 where he charged at a six inch-taller, tougher and senior rival at his first boxing match. The rival, later army chief S.F. Rodrigues, won the match but Narendra came to be called Bull Kumar.

Losing four toes to frostbite in 1961, the Bull charged up peaks in dozens, becoming the first Indian to scale Nanda Devi (1964), and Kanchenjunga from its northeast face (1976), which was tougher than Everest. He beat the Chinese to Barahoti and got patted on the back by Jawaharlal Nehru, skiied down the Trisul wearing polythene sheets as stockings, and scaled Everest 20 times. 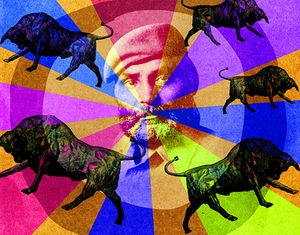 Bull was heading the mountain warfare school in Gulmarg in 1977 when an old German rafter-friend asked if he would help him raft down the Nubra. The US-printed map of northern Kashmir that the German unrolled made Bull’s blood freeze. It showed Siachen, the largest alpine glacier on earth, in Pak-held Kashmir. (The glacier lay between Pak-held Kashmir and China-held Aksai Chin, but had not been marked on ground or map, and was thought to be India’s.) From the German he learnt that Pakistan had been issuing climbing licences for the area.

Bull grabbed the map and took it to the Army’s operations chief M.L. Chibber; Chibber got chief T.N. Raina to sanction a ‘training trek’ by Bull and team to the heart of Siachen. There they picked up tin cans, chocolate wrappers and cigarette packets left behind by Pak and Pak-licensed climbers, and were also threatened by a Pak Sabrejet, which fired warning smoke shots. After making one more Siachen recce during which he became the first Indian to climb the 24,350-foot Sia Kangri, Bull published an account of his explorations.

That was to test the ice. The publication alerted the Pakistanis. Soon Indian spies in London learnt of Pak Army having ordered thousands of pairs of special mountain boots. The Siachen game was afoot, literally.

Surmising that the Pak army was planning to occupy the glacier so as to get a link between the Pak-held Karakoram Pass and China-held Aksai Chin, Indira Gandhi sanctioned Operation Meghdoot in 1984, by which a brigade climbed up the Saltoro peaks that guard the glacier. They have been sitting there since, having named their main base ‘Kumar’. All the Pak cannons and all the Pak men haven’t been able to dislodge them since.

Tailpiece: Charles MacGregor was an Indian Army officer who fought in breaking the siege of Lucknow, in China, Bhutan, Abyssinia, Afghanistan, and the East Indies, and also headed the intelligence department. In 1870, he founded the United Service Institution of India, which is now Asia’s oldest military thinktank. The MacGregor Medal, instituted in his memory in 1888, is the highest honour for military reconnaissance.