The fans of neither of them would approve of this, but I am finding more in common between Jawaharlal Nehru and Narendra Modi. As this column discussed three fortnights ago, both have been practitioners of personal diplomacy. Here’s another. They share a love for good clothes.

Though his mentor wore only a loincloth and was called a half-naked fakir by Winston Churchill, Nehru loved to dress well. When fellow Congressmen faulted him for wearing a suit to Europe in the 1930s, he told them to imbibe Gandhian values and not imitate Gandhi’s garments.

Nehru looked dapper in his achkan with a rose in the buttonhole. In summer he wore a jacket to which he lent his name. Modi has cut it to his size and stuck his label; now it is called Modi jacket. Nothing wrong. Rulers should draw strength, sustenance and style from their predecessors.

Though Gandhi lent his name to the khadi Congress cap, Nehru made it a politician’s trademark headgear. The association between neta jis and the khadi cap peaked during the Morarji Desai era, but it began to vanish from political pates in the Rajiv era. Probably, Rajiv’s outburst at the Bombay AICC centenary against power-brokers gave it the knockout punch. New-gen netas dumped it into the dustbins of history and confines of pocket cartoons. Today it is worn mainly by Congress Seva Dal volunteers in white khadi, Rashtriya Swayamsevaks in black woollen, Maharashtrian elders in general and Anna Hazare in particular. 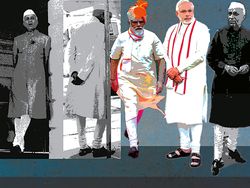 Dressing well seems to have been a family trait with the Nehrus. Motilal was quite a dandy; Indira and Rajiv dressed appropriately. She looked the Bharatiya naari with her sari over the head on political occasions in India, but charmed world leaders in sleeveless blouse and dapper hairdo when abroad. Rajiv proved that the heavens wouldn’t fall if an Indian PM wore a western suit or jeans and t-shirt. He wore kurta-pyjamas while politicking, bandhgalas while banqueting with statesmen, suit and tie to school reunion, and jeans and t-shirt on holidays.

Like the Nehrus, Modi loves to be seen in good clothes. Once he took it too far, when he wore a monogrammed suit that earned him a Malvolio image. Rahul Gandhi called his government suit-boot ki sarkar and that cost Modi the Delhi elections a month later. His wardrobe has sobered down since.

Modi also loves jazzy headgear. His I-Day addresses are becoming the talk of the town from Toronto to Timbuktu, not only for what he says but also for what he wears on his head. For his first address, he wore a polka-dotted red turban; the next year it was an orange with shades of blue, red and green. In 2016 he donned a tie-and-dye turban in pink, red and yellow; 2017 saw him with a yellow and red headgear that had golden embroidery and a tail longer than Mandrake the Magician’s, but shorter than Lady Diana’s wedding gown. In 2018 he donned an orange-and-red one with a tail, and last year it was a red-and-orange leheriya turban with a tinge of green.

This year, Modi appeared in an orange-and-yellow Rajasthani safa with a tail, said to have been sent by one Sujansinh Parmar from Tapi in Gujarat. Parmar, a farmer, has made turban-rolling a hobby, and has gifted fancy headgear to Rajnath Singh, Amit Shah and Rahul Gandhi.

Tailpiece: Following the European custom, Congress leaders used to leave their caps in the hall before entering the viceroy’s room. Once Lady Irwin happened to pick up Motilal’s Gandhi cap which he had left in the hall while calling on Lord Irwin. It wore the label of a fashionable London hatter.