Licence to make, licence to kill

No fighter plane has come in with a bigger bang than the Rafale. TV anchors and studio strategists spent hours waxing eloquent about its capabilities—a lot of it real, a lot more yet to come with India-specific enhancements, and still more imagined. Many called it a game-changer.

In the olden days, there were separate planes for separate jobs. There were heavy bombers, interdiction bombers, interceptors, air superiority planes, ground attackers, short-range fighters, long-range fighters, spy planes and so on. Each type was designed, built and armed for specific roles. The current trend is to have more multirole planes and a few specialist planes. 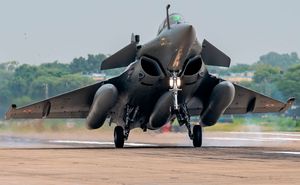 The Rafale will be our first multirole bird. By all accounts, it is the most agile multirole fighter that money can buy—it can perform dogfights, drop bombs, and shoot missiles air-to-air or air-to-ground. The French know how to pack a first-class punch in every plane.

We have been buying warplanes since the 1960s, and never ever have we bought a dud. Our tiny Gnats stunned the world when they shot down US-made Sabrejets in 1965; our MiG-21s shot holes through the roof of the governor’s house in Dacca in 1971 with more precision than what the Americans achieved when they shot a missile through the window of the Al Jazeera office in Kabul in 2001. The MiG-21, and its Biz (now Bison) version from which Abhinandan Varthaman shot down an F-16 last year, have proven to be the most enduring fighters ever made in the world.

Our MiG-23s and MiG-27s were neighbour’s envy and owner’s pride—airplanes that could fold their wings and turn around in mid-air like birds of prey! Our pilots became Scarlet Pimpernels of the skies when they flew half a squadron of the super-secret MiG-25, the fastest and most elusive airplane ever made, one that could not be reached by any known missile.

We got the Jaguars, the meanest interdiction bombers which the Chinese think can still cut deep into the treeless Tibetan territory. Then came the MiG-29, the beastliest air superiority fighter which has bested F-16s in several NATO wargames. And there are the French Mirage 2000s, flying with their delta wings which look like pretty skirts but packing awesome power. And finally the Sukhoi-30MKIs that can stop dead mid-air, swoop up like a cobra, and also can deliver an atom bomb anywhere across the Eurasian landmass from Wales to Vladivostok.

All these planes were game-changers in their time. So will be the Rafales, provided that we get them in sufficient numbers of squadrons. As of now, we have got five planes and have contracted to get 36.

What the critics ask is: wouldn’t we have to knock at the doors of the French again when we need more? Indeed yes. The members of the Narendra Modi government’s defence acquisition council would have been reminded of this when they approved two fighter buys only a month ago. With the Chinese breathing fire across the Ladakh Himalayas, the council was, on July 2, constrained to order 21 more MiG-29s and 12 more Sukhoi-30MKIs.

The order for the Sukhois has gone to Hindustan Aeronautics Limited thanks to the Narasimha Rao and the Deve Gowda governments. While negotiating the original Sukhoi deal, they had also got the technology and licence to make the planes in India. The order for the MiG-29s has gone to Moscow because, when the Soviets offered the technology and licence as well the planes in the 1980s, the Rajiv Gandhi regime said: No thanks; keep the licence, we will take only the planes.