Our top three VVIPs—the president, the vice-president and the prime minister—have been flying around the world in Air India One for several years. The tickets issued to the VVIPs and to every person in their entourage mention the flight number as AI-1.

Actually, there is no single aircraft designated as Air India One or AI-1. Whenever any of the trimurtis wants to fly out, our flag carrier would convert two (one as standby) of its best Jumbos into executive jets, with prefabricated cabins, conference rooms, secretariat space, confidential communication consoles, working desks, lounge sofas, beds, curtains, carpets, magazine racks, metallic nameplates et al. There would be separate seating space for aides, delegation members, security men and for the media, too (not on Narendra Modi’s flights). 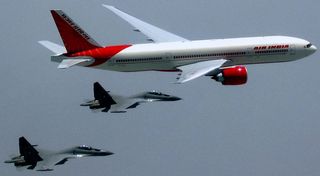 The flight, and not the aircraft, is given the call sign Air India One. The outfitted aircraft is ground-checked and flight-tested several times before it is stamped fit for taking the VVIP load. This whole mantling and dismantling would take Air India a few days, even if the actual VVIP trip is only a one-day dash to Thimpu or Timbuktu.

All this is going to change. There will not be any need for outfitting the plane every time a VVIP wants to fly out. India is getting a special airplane for the prez, the vice and the premier. (No prize for guessing who among the three will be flying it more.)

To be precise, it will not be one plane but identical two. Two machines, bought from Boeing, were given to Air India two years ago, but have since been sent back to the maker for outfitting them with missile protection suites. One of those, we are told, is a high-intensity laser suite that will misguide any man-portable missile flying towards the plane. Most of the missile-killing will be done automatically, without the pilot or the crew knowing anything about it. The gizmo will simply neutralise the incoming missile, and then tell the pilot, “Honey, I killed a missile.”

The flight is slightly delayed. Boeing was scheduled to deliver the two outfitted 777s in June, but has now asked for time till September, citing Covid-19-caused delay in getting the work done.

No heartburn. In these physical distancing days, our VVIPs are sitting pretty at home. Narendra Modi has not done any globe-trotting since mid-November, after he came back from Brazil. Since February end, no Bharat yatra either (though domestic flying is on the Air Headquarters Communication Squadron’s Embraer executive jets), save a day trip to Kolkata and Bhubaneswar on May 22.

Diplomacy has gone digital. Modi had a digital pow-wow with Australia’s Scott Morrison last week. Politicking is physically distanced. Buddy Amit Shah has been addressing Bihar’s voters without stepping out of Delhi. “Do gaz doori bahut hai zaroori,” says Modi. That’s two yards away—more than an arm’s length at which he keeps Nehruvians.

The loser in the bargain is Air India. Even before it loses the status of being the flag carrier, it will lose the honour of being the flag-bearer carrier. After the outfitted 777s arrive, they will be deregistered from Air India and registered with the IAF. Air Force pilots will fly them, but Air India Engineering Services Ltd will be looking after them.

What would they call the flight? Not Air Force One, please. That’s Donald Trump’s. How about IAF-1?