Drunk on the dregs of Nehruvian history

Daphne du Maurier’s little known novel The Flight of the Falcon is about two brothers Aldo and Beo who grew up in Fascist and post-war Italy. When Aldo discovers that he was an adopted child, he keeps the discovery to himself, and begins to make Beo and everyone else believe that Beo is the adopted one. The pretense grows on Aldo; he puts on the airs of an aristocrat, belittles his brother on every occasion, invents family myths, fakes legends, and creates pretentious traditions to assert his false ancestry.

Many in the Sangh Parivar are doing much the same these days. They have realised that their earlier-gen leaders hadn’t been there in the freedom movement. Neither among Tilak’s extremists, nor among Gokhale’s moderates; neither with Gandhi’s non-violent masses, nor with the violent revolutionaries like the communist Bhagat Singh, Chandrasekhar Azad or Birsa Munda.

When Congressmen, communists, socialists, swarajists and even anarchists were burning British clothes, boycotting British courts, defying British laws, and facing British batons and bullets, several of the Sangh men were doing vyayam in their sakhas. The odd one or two, like V.D. Savarkar who did break a British law or two, soon chickened out and got out of prison after signing on British-dotted apology lines.

For all their love for militarism and regimentation, hardly any one of them had gone forward to enlist in the Indian National Army with Netaji Bose, Mohan Singh and Shah Nawaz Khan. Nor had any Sangh men been found among the brave ranks of the communist-inspired sailors who raised the tricolour of national freedom on Royal Indian Naval ships. 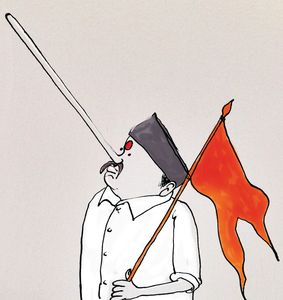 So what do they do, to capture the patriotic legacy? Simple! Do what Aldo did. Belittle the Beos, fake the legends, falsify history, and vilify the virtuous.

An easy target has been Tipu. No Tipu Jayanti, please—they have decreed. Shall we have Cornwallis’ Jayanti then? Or Wellesley’s?

Another Beo they have targeted is Jawaharlal Nehru. A Goebbelsian propaganda is on across social media platforms, aimed at belittling his legacy. Anonymous posts, dripping with toxin about his ancestry, his progeny, his character, and his role in the national movement are flooding social media groups.

Documents are being faked, often in the language of the lumpen, but with imagination of the vile and wild, to show that Nehru had betrayed Patel, told on Bose, spurned Nepal’s offer to merge with India, shooed away the ‘king of Kalat’, and even agreed to sale of Gwador to Pakistan!

Pastimes of the lumpen? Perhaps yes. But sadly, even respectable members of society, the genteel uncles and aunts who greet you in the morning with wise thoughts and vasudhaiva kutumbakam prayers, are falling prey to this game of the vice and the vicious, and happily indulging in sujana-apavaad-paap.

The cancer of vilification has spread to even the highest echelons of the state and come to mislead even the helmsmen of Hindustan. A few days ago, the nation witnessed the prime minister being misled into believing and mouthing false histories. At a poll rally in Karnataka, he talked about Nehru having insulted Kannada pride by humiliating his two army chiefs who had hailed from Karnataka. Not only was the entire anecdoting imaginary, but even the dates of the tenures of the chiefs were wrong.

Perhaps, that was nothing. The lowest point in our political discourse had been reached weeks earlier when the incumbent prime minister, speaking within the precincts of Parliament, denigrated the first prime minister, the founding-father of India’s liberal parliamentarism.

Reign in the false prophets, prime minister! As has been warned in the Sermon on the Mount, they “come to you in sheep’s clothing, but inwardly they are ravening wolves”.