There is no shortage of nicknames for Trump: one website alone lists 409

A friend invariably refers to Trump as Drumpf. I thought it was a nickname inspired by The Smurfs and doused generously with indignation. Except, as the friend pointed out when asked, that this was indeed the family’s ancestral German surname, changed somewhere along the centuries. And wisely so—a hotel named Drumpf wouldn’t attract much custom.

That besides, there is no shortage of nicknames for Donald Trump: one website alone lists 409. These include: Big Donald, given by Marco Rubio, later fine-tuned to Pig Donald by feminists; Chaos Candidate given by Jeb Bush; The Donald used by his first wife Ivana Trump; Poor Donald given by Hillary Clinton; Groper-in-Chief coined by the columnist Nicholas Kristof; Boldfinger and Humpty Trumpty by the poet Michael Burch and so on. Late night show hosts have competed with each other to tabulate lists: Floridian Fondler, Tangerine Ball Bag, The Lardfather, VoldeMoron and dozens of others featuring Orange…. Somehow, none of these really stuck to Teflon Don; his erstwhile Twitter handle @TheRealDonald did better, once you got over that involuntary image of a hamburger joint and Disney’s duck.

In the nicknames department, Donald Trump gives as good as he gets, or even better. In the manner of a T-20 opening English bat he spews nicknames fast and furious in every direction—political personalities, media houses, even the occasional foreign leader are enveloped in his corrosive resentment. Many of these monikers are so of a piece with his personality that they must be his own creation: it is difficult to school or ghost such vituperation. And most of them have proved remarkably adhesive, damning character and seeding doubts. 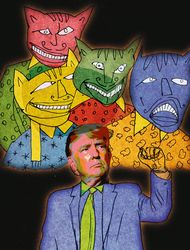 In 2020, Joe Biden may have had the last laugh but Trump clearly had fun on the way, tossing out new nicknames for Biden with every campaign speech: Basement Biden, Joe Hiden, Sleepy Joe, even SleepyCreepy Joe, Quid Pro Joe and so on. Another presidential rival, the shortish Michael Bloomberg was Mini Mike, while Kamala Harris got the straightforward Nasty Woman.

Trump’s running war with much of the US media was fertile ground for this talent to bloom. CNN was Fake or Fraud or Low-ratings, New York Times was Corrupt NYT or Failing NYT or simply the Grey Old Lady. Most critics got ‘Crazy’ or ‘Little’ or ‘Fake’ added to their names; CNN’s Don Lemon, no shrinking violet himself, became Sour Lemon and the Dumbest Man on Television.

Trump’s latest swipe is aimed at Florida Governor Ron DeSantis. After the latter’s impressive re-election win, Trump named him Ron DeSanctimonious, a sure sign that DeSantis is now officially a threat in Trump’s eyes for the 2024 Republican nomination. This nickname, however, has not stuck, perhaps because it is too obviously workshopped; as one commentator said: Trump doesn’t even know what it means. If Trump had got an advance peek into a BBC quiz on the subject, he may have done better: the options offered include DeSanatorium and DeSanta Claus. The Donald’s touch may be slipping like his hold on the Republican party as seen in the recent mid-terms; Sanctimonious or not, DeSantis may actually hold the trump card for the 2024 primaries.