Will Camilla wear the Kohinoor?

Charles is occupied by thoughts of his coronation next May

A delightful clip on Twitter brightened the autumnal grey beyond my window: Liz Truss arriving for her weekly meeting with King Charles greeted him with a plummy “Your Majesty, lovely to see you.” The king, a picture of resigned elegance, responded: “Back again? Dear oh dear… anyway...”

There could be more than one explanation for the king’s remark. Perhaps he thought that the prime minister had gone away forever, as many believe she soon will. Or he was steeling the post-lunch Royal stomach for another swerving Truss U-turn of the kind usually seen on Top Gear. Or he was preparing to dutifully sink into a sofa and listen to the good news from the prime minister: inflation in the UK is only at a 41-year high compared with the 60-year high in Germany.

But my guess is that the king’s mind, just when Truss popped by and bobbed her little curtsy, was occupied by thoughts of his coronation next May. Some decisions were easy. It had to be a shorter, simpler, restrained ceremony: only 2,000 guests instead of the 8,000 of 1953; only one hour instead of three, so peers could wear suits and not have to smuggle in snacks under weighty robes. And no gifting of gold ingots; digital transfers, should the urge be too strong, were always an option. Some fudge would have to be worked out on the anointing oil as evidently one ingredient was obtained by painfully squeezing caged civets; that would not do for the president of the World Wildlife Fund (UK). 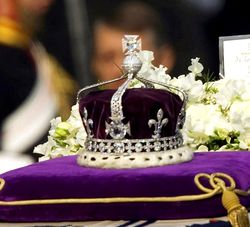 But there was a real royal twister in the mix: what should Camilla wear to the coronation by way of headgear? There was, of course, a perfectly serviceable crown around, one with the marvellous Kohinoor stuck in its front cross, which other queen consorts—his grandmother Elizabeth, Queen Mary and Queen Alexandria before her, had worn for their respective coronations. The problem was that all that had been a long time ago, and while he had been all padded up and waiting, the world had changed. It had, quite literally speaking, Woken up. Statues were being chucked out, reparations demanded, art objects—like the Benin bronzes—were actually being returned. Loot, it seemed, was no longer for keeps but had a return-by date.

If Camilla were to go into Westminster Abbey with the Kohinoor glinting like the blazes in the spring sunshine, there would be an awful row. The Indians, in particular, who tend to be terribly sensitive about the strangest of things, would sulk and thousands of them would get on to this infernal social media and dig up dirt. All that stuff about the boy king, Duleep Singh, being made to surrender the diamond to Dalhousie after the duplicitous annexation of Punjab would come up. That story about young Duleep “gifting” the diamond to old Victoria would not wash anymore; the mood of the world had changed.

The Indian government might even boycott the coronation, a sort of non-cooperation and they, His Majesty knew, were good at that. That would, of course, free up one seat at the Abbey, but then it may free up one seat in the commonwealth, too. That trade deal that the PM goes on about might sink and what if by then the next British prime minister was actually of Indian origin? Clearly there was too much at stake. He would have to delicately break it to Camilla that she would simply have to wear something else, never an easy prospect if the lady has her mind set on something. No doubt she would ultimately understand, but the moment would be difficult.