A panel has put together 70 books from Commonwealth nations, including India

A year-long celebration is under way to mark the Platinum Jubilee of Queen Elizabeth II, as she becomes the first British monarch to celebrate a seventy-year reign, eclipsing the almost 64-year rule of Queen Victoria, once empress of India. A year of parade and pageantry at which the British excel, of street parties, star-studded concerts, a Derby, hog roasts and an extended four-day Bank holiday in June.

Somewhat predictably, there is much focus on the Platinum Pudding competition in which five thousand home bakers are vying with each other to invent the best new pudding for the jubilee. Even as we go to press, the five finalists in this competition have been announced. Among them is one Shabnam, whose entry—a rose falooda cake—is inspired by Mumbai’s street food. Those who raise an eyebrow in surprise, even one-eighth of an inch in the manner of Jeeves, would do well to remember that coronation chicken—shredded cold chicken with a distinctly Indian flavoured curried mayonnaise dressing—was invented as part of the Queen’s coronation banquet in 1953. It is all very British and a trifle quaint but charming enough to distract us for a moment from this hard-boiled world of conflict, Covid and climate change. 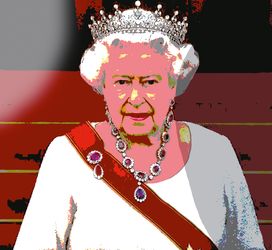 The celebratory event that struck my literary bone is The Big Jubilee Read. A panel of literary experts has put together a list of 70 books—ten for each decade of the Queen’s reign—from across the Commonwealth. Anybody looking for a reading list for the next two or three years that covers novels, short story collections and poetry anthologies could hardly do better than simply follow this one.

Two wonderful books from India figure in the list for the Queen’s first decade: R.K. Narayan’s The Guide, which later became the celebrated Dev Anand film, and the hauntingly titled Sunlit on a Broken Column by Attia Husain, an evocative novel about traditional Muslim family life in India in the shadow of India’s freedom struggle. V.S. Naipaul also figures in this list with A House For Mr Biswas, but predictably he has nothing to do with India; he belongs to Trinidad and Tobago/England. The next Indian entries can be found in the decade of 1972-81. Kamala Markandaya’s The Nowhere Man and Anita Desai’s Clear Light of Day, one about racial intolerance in Britain and the second about the tensions and beauty of post-independence family life in India, are lined up alongside Salman Rushdie’s Midnight’s Children; Rushdie, however, is listed as England/India. In the 1990s there is Arundhati Roy’s The God of Small Things and Raj Kamal Jha’s The Blue Bedspread while Rohinton Mistry, with his A Fine Balance represents India/Canada. No writer from India or of Indian origin has made it to the list for the last two decades.

At one level this reading list celebrates the immense literary talent that belongs to the Commonwealth: besides the above there are such major writers as John Le Carre, Michael Ondaatje, Chinua Achebe, Margaret Atwood, Iris Murdoch, Seamus Heaney, Anthony Burgess as well as lesser known names from Bangladesh, Sierra Leone, Jamaica…. But even a cursory examination of the literary themes, especially in the works from India, Africa and the Caribbean, throws up persistent commonalities: racism, slavery, partition, tradition and change, immigrant angst, torn societies, broken polities…. All this may owe less to the Commonwealth’s benevolence and more to the repressive policies of colonial rule, the clash between European and traditional societies, the predicaments of individuals caught between two worlds.

But of all that some other time. I have no desire to spoil the party. Besides, I am rooting for the rose falooda cake.