The move away from fossil fuels is not happening fast

UN Secretary General Antonio Guterres, in a stark statement this week, sheared the jargon off the latest report of the Intergovernmental Panel on Climate Change (IPCC). The report, he said bluntly, is “a litany of broken climate promises” and “a file of shame cataloguing the empty pledges that put us firmly on track towards an unliveable world”.

The UNSG’s words are not empty rhetoric but fully backed by the science of climate change. If the world, as we know it, is to survive, global warming has to be limited to 1.5 degrees C over pre-industrial levels, an aspiration agreed to at the 2015 Paris summit. However, current global policies are hurtling the world towards a 2.7 degrees C warming; the climate impact will multiply hugely with every tenth of a degree increase. If evidence is needed, it is all around us: extreme heat, droughts, record floods, climate refugees, raging wildfires, loss of health and habitat. 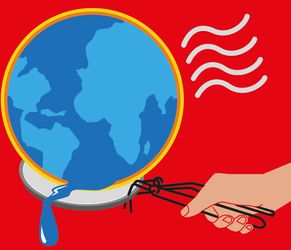 Islands have actually drowned and tipping points—thresholds after which small changes can lead to dramatic shifts in the earth’s life support system—are imminent for the Amazon rainforest, the Gulf stream and the Greenland ice sheet; even as the world watched a few days ago, the Conger ice shelf measuring about 1,200sqkm collapsed in East Antarctica after unprecedented high temperatures, a dramatic portent of things to come. And all this at present global warming of 1.1 degrees C.

We are in “now or never” territory. To meet the 1.5 degrees C aspiration, greenhouse gases (GHG) need to peak in 2025 and their emissions need to halve by 2030; carbon neutrality has to be reached by 2050. Instead, carbon emissions have risen by 60 per cent since 1990 when the first IPCC report was published; 100 fossil fuel producers are linked to 70 per cent of these which, incidentally, exceed the total emissions since the start of the industrial revolution. If we have to have a fighting chance of capping global warming at 1.5 degrees C, our dependence on fossil fuels has to be drastically cut.

Yet, despite genuflections at the altar of net-zero during the COP26 at Glasgow, the move away from fossil fuels is not happening fast enough; GHG emissions are set to increase by almost 14 per cent in the 2020s.

Europe’s reaction in the wake of the Russia-Ukraine conflict further demonstrates the point. Wanting to cut their heavy dependence on Russian coal, gas and oil—estimated at US$1 billion a day—major European economies find their energy strategies in disarray.They are far behind in the investment and capacity needed to replace Russian fossil fuels by renewables so they are scurrying for more fossil fuels. The US oil and gas production is reaching record levels: it is committed to releasing up to 90 million barrels from its strategic petroleum reserve and supplying an additional 15 billion cubic meters of LNG this year to Europe. Qatar is being courted to redirect its gas towards Europe.

Coal is back: old European plants are likely to run at full capacity and Australian coal will land in Europe. The Norway-Poland gas pipeline, earlier held up on environmental grounds, has resumed construction. Changes in the European Union’s taxonomy now allow green financing for natural gas infrastructure, despite the fact that its extraction and transport produces methane, potentially worse than carbon dioxide. Climate concerns are now on the back-burner and the focus is on revamping infrastructure to handle fossil fuels from new sources.

If this trend continues, Europe is sending a wrong signal to the rest of the world. Meanwhile, the meteor of climate change is hurtling straight at us.