Belfast, Brexit and the border

Belfast, the gritty capital of Northern Ireland where I found myself last week, is watching the prime ministerial race in London with an understandable mix of resignation and concern. The reason is clear: As during the 2016 run-up to the referendum, there appears to be limited bandwidth or empathy in London for how Brexit could negatively impact the deeply conflicted politics, as well as the economy, of Northern Ireland.

An uneasy peace has prevailed in Northern Ireland since the 1998 Good Friday Agreement which ended ‘The Troubles’—three decades of riots, killings and counter-killings, bombings and murders—between Unionists and Republicans, Protestants and Catholics. Those who recall those volatile years regard this agreement as a major achievement, even though the packaging away of the troubles has been imprecise and imperfect. Several leftover issues simmer under the surface, as evident in the current political freeze between the Democratic Unionists and the Sinn Fein, which has left the country without an executive government for the last two years. 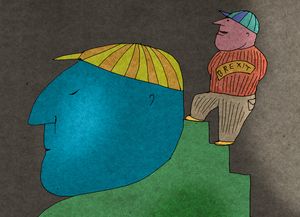 Conflict lives on in the muscle memory of this edgy city. The calmness evoked by the languid Farset river flowing through pastoral green appears fragile; one gets the feeling that anything can happen anytime. Every family has a story of loss. Schools are still largely segregated and sectarian. Walls eloquent with political murals still snake through the city separating Catholic and Protestant working class neighbourhoods, and gates between them shut every evening. A Catholic walking into the Protestant area takes care to tuck away his medallion of Mother Mary. Names typical of sectarian identity are disguised in the wrong company. The way you pronounce a particular consonant could still make you lose a job; a British accent is a clear disadvantage. Poet Seamus Heaney’s words resonate: “And whatever you say, say nothing.”

Brexit hangs like a large question mark over this fractured space. Fifty six per cent of Northern Ireland voted ‘Remain’ in 2016, and thus feel ignored. But the dominant Democratic Unionist Party strongly favours ‘Leave’ and holds leverage in the crucial support it provides to the Tories in Westminster. Brexit could easily make Northern Ireland the frontline, because that is where the United Kingdom physically meets the European Union—at the border between Northern Ireland and the Republic of Ireland.

Thanks to the 1998 agreement, this border, bisected by about 300 roads, is virtually non-existent today. Only a change in your cellphone provider or road signs in Gaelic, in addition to English, will indicate that you have crossed the line. Dairy products and cattle criss-cross between north and south freely; trade, tourism and employment are integrated.

A Brexit that converts this back into a hard border—as a no-deal Brexit well might—with customs checkpoints and watch towers manned by British soldiers would be considered a betrayal of the Good Friday Agreement. It could bring back the worst memories and invite a return to violence. Neither the alternative of a technology-controlled soft border nor the divisive ‘backstop’ arrangement (avoiding a hard border even if it means keeping the entire UK in a customs union with the EU for the present) have gathered much clarity or support. In fact, hardcore Brexiteers see the backstop as a trap to keep the UK linked to the EU.

Meanwhile, in Belfast, wishful thinkers wait for a second referendum that could reverse Brexit. The hard Republicans hope that these complications will hasten the reunification of Ireland and the majority simply pray for the continuation of the cold peace. And hope someone in London is listening.