Vivienne Westwood: The politics of a punk queen

She was as much an activist as she was a designer

Before Alexander McQueen—that brilliant, subversive, iconoclastic British designer—there was Vivienne Westwood. All the adjectives that apply to him fit Westwood as well, perhaps even better since she lived until 81, while he died young in 2010, at the age of 40.

Westwood’s passing last week has put the spotlight on this remarkable woman’s glowing career that spanned six decades. Tributes poured in from everyone in fashion. Heck, even from Julian Assange, who requested for parole to attend her funeral. Westwood protested the extradition of Assange to the US by sitting inside a giant suspended bird cage outside a London court in 2020. She was, after all, as much of an activist as she was a designer.

It would be an understatement to say Westwood’s contributions to fashion are immense. Her reach was so far and wide, and game-changing. Yes, this was one woman, a former primary school teacher, whose works continue to inspire the industry even today—from Versace to Balenciaga. 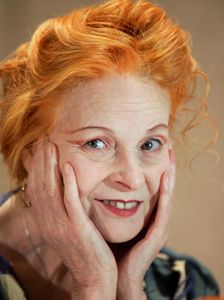 Westwood started designing in the 1970s with a revolutionary’s approach to street style. Her shirts were ripped, her T-shirts had slogans and safety pins, she used tartan like it was lace, and was the first to make us wear underwear as outerwear. She kept her hair a flaming orange even until her later years. She brought into fashion what we understand today as post-modernism. Breaking away from the shackles of elegant beauty or oriental minimalism, Westwood introduced us to the punk movement and made it mainstream. Even in her 60s, she dressed like a rebellious teenager. Her mission—personal and professional—was to question the establishment and break away from norms and strictures.

Andrew Bolton, the curator of the costume department of New York’s Metropolitan Museum, said of Westwood: “She was always trying to reinvent fashion. Her work is provocative, it is transgressive. It is very much rooted in the English tradition of pastiche, irony and satire.”

Perhaps the greatest story of her life is also the most scandalous. In 1992, Westwood was invited to the Buckingham Palace to receive an Order of the British Empire. She wore a dull grey suit and skirt. Once she stepped out, she twirled for the photographers only to reveal she was not wearing any underwear. Unusually, the queen did not mind; Westwood was often invited back. In 2006, she was designated Dame Commander of the British Empire—the female equivalent of a knighthood.

Her fantastic memoir, Vivienne Westwood, that she co-wrote with Ian Kelly, has a remarkable tale of how she was on her way to an abortion clinic with the money of her then-partner’s grandmother, but changed her mind when she spotted a cashmere sweater and bought that instead.

It is surprising then that in her later years, she began to tire of fashion and its consumerism. Westwood was among the first to focus on climate change. In 2010, she said, “I just tell people, stop buying clothes. Why not protect this gift of life while we have it?” In 2015, she drove a tank to then-prime minister David Cameron’s home to protest fracking. She was vegetarian and lobbied against the sale of fur.

Westwood remains the finest example of how fashion is actually a cultural conversation. It really is not about buying beautiful clothes, it is about making your personal stance public. You wear it like a badge, or write it on your T-shirt, or dye your hair.

Fashion is nothing if not political.