Huma Qureshi shines as villain and victim of 'Monica, O My Darling'

A small indie film has introduced to us a new type of heroine. I am hoping she stays a little longer, and shows up in a few more films soon.

Vasan Bala’s Monica, O My Darling released on November 11, and it is already being heralded as the best film of 2022. A lot of this has to do with its theme—a slick neo-noir murder mystery that almost pays obeisance to the genre. But most of it has to do with its stellar casting. Especially that of Huma Qureshi as Monica Machado.

Monica, the titular star, is as much the heroine of this story as she is the villain, and unusually, the victim. She plays an office secretary (which could have been guessed by her name in this homage to retro Bollywood) who has slept with almost half of her colleagues—from the boss to his son to the accountant. Unbeknownst to the others, she tells each of them that she is pregnant with his child and would like child support, not marriage. So far, so ordinary. Films chronicling our middle-class ambitions have normalised avarice in Hindi cinema to the extent that we barely consider it a vice. Perhaps it is the effect of India’s groaning social divisions, or maybe just modern mores at play. 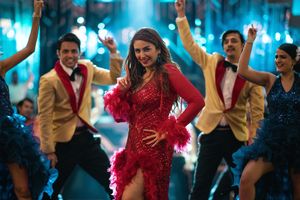 Moreover, is Monica Machado—named after countless Christian secretaries of Bollywood films of yore—a vamp? Qureshi is dressed in reds, blacks and vivid monochromes throughout the film. It is almost as if the brightness in her clothes conceals her dark side. The monochromes instead highlight the shades of grey she so obviously stands for. Her name, not coincidentally, is inspired by Helen’s item number in Caravan (1971), where the industry’s most famous vamp wears red sequins and ruffles, fishnet stockings, and hisses and purrs as she waits for her lover, even as she downs a glass of wine. All kinds of forbidden here.

Our headlining Monica is the heroine, not just because she sleeps with the hero Jayant (Rajkummar Rao), or because when three of her lovers collude to murder her, she shows up to work the next day alive and kicking ass. It is not because she has burst into the film performing a Helen-esque cabaret, sumptuous in her red sequins and ruffles, too. Monica is the heroine because she gets played, too, and ends up with the audience’s sympathy. No matter how hard a woman tries to find her spot in a man’s world, she will get stomped eventually.

Monica’s real glory comes from her manifestation. Here is a beautiful woman—more overweight, less voluptuous—who has men eating out of her hand. In almost every scene, from her opening shimmy to her waiting for a suitor outside the Bates Hotel to the fabulous fight scene between her and Jayant, Monica’s ample curves seem to be doing more than just setting the narrative of a female outlier. She is the female protagonist. The main course. The real deal. All of her in her new robust shape.

It has been a while since we have seen an Indian female actor upchuck the get-slim-get-sexy memo. Vidya Balan broke the mould in The Dirty Picture, and kept her shape thereafter. Balan, Sonakshi Sinha and Qureshi have all struggled with weight loss, and have become advocates for embracing fuller-bodied women as heroines.

Since the film is a tribute to retro cinema, perhaps it is time to bring back more authentically Indian, fuller figures for our heroines, too. While we’re at it, can they also not be Ms Goody Gumboots?