Fashion business's biggest problem now is that it has no money

It has been two years since we have had a full-blown fashion week and I have missed it, honestly. Just having much of the community under one roof at the same time, savouring the fruits of their labour and partaking of the excessive beauty of Indian fashion is truly an exciting space to be in.

This is the first year that Lakme and the official governing body FDCI (Fashion Design Council of India) have come together for an on-ground event more than a decade after they famously split. Much of the split was because the Mumbai designers found Delhi too expensive to travel to, and vice versa. This remains true today, too. And yet the mixed-up week has such an amazing lineup of well-known brands such as Anamika Khanna, Rajesh Pratap Singh, Abraham & Thakore, and Eka, along with younger names such as Aisha Rao, Mishru, Nikita Mhaisalkar and others. Regulars such as Gaurang, SVA by Sonam and Paras Modi, Anushree Reddy and Payal Singhal customarily have delightful shows. 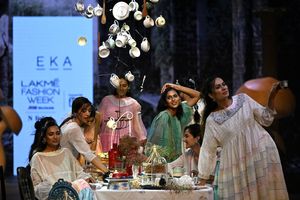 The venue has moved from the spectacular Jio Gardens in Mumbai’s Bandra Kurla Complex (the shiny swanky BKC), to right across the road. On Dhirubhai Ambani Square—the signage is distractingly big—is the Jio World Convention Centre, an airport-size behemoth filled with more than half a dozen exhibition halls and scores of meeting rooms spread across 1 lakh sq.ft. It is so absurdly huge that you are always secluded. The gardens, meanwhile, were smaller and so much more stylish, dressed up with sweeping textile buntings, installation art at every corner, pop-up restaurants and a live DJ playing trance in the middle of the afternoon. Yeah, it was one amazing fashion party and you could dance if you wanted to.

The convention centre, on the other hand, makes it look like a trade fair with some elevator music playing in the lobby. But that is not the fashion business’s biggest problem right now. Its greatest bugaboo is that there is no money, and the little money that exists is Reliance money.

The $99 billion company, with business in petrochemicals, telecommunications, energy and retail, is holding the fashion week together. It bought over IMG Worldwide (that first brought fashion week to India) in 2020 and rebranded it as Rise. Even though Lakme remains a title partner and the hosts of the finale show, they have little else to do here.

Reliance has also spent much of the last two years snapping up stakes in some renowned fashion designers—Abu Jani-Sandeep Khosla, Manish Malhotra, Ritu Kumar, Anamika Khanna and Rahul Mishra—each one for undisclosed sums. Last year, they opened a tony mall close by—Jio World Drive—that houses their designers along with their kitty of international brand names, like Muji and Michael Kors.

The Lakme-Rise’s tie up with FDCI means only one thing—that the Council will soon be a sleeping partner.

Of course, the event is not the mainstay; it barely has a profit of 08 crore to Rs10 crore each season. It is India’s moneyed shopper. The Indian textile and apparel market reached a value of $151.2 billion, and is expected to reach $344.1 billion by 2027. According to the Retailers Association of India, retail businesses across India saw a 21 per cent jump in sales in September 2022 compared with September 2019.

Fashion, not fashion week, is the real deal.