Issey Miyake had fallen for Gujarat and Kutch belt

He took Indian hand loom to the east and the west

What is common between architect Zaha Hadid, Apple founder Steve Jobs, actor Meryl Streep, TV star and businesswoman Kim Kardashian and the late Indian fashion designer Wendell Rodricks? They all loved and wore Issey Miyake. The late Hadid had said that the clothes by the Japanese fashion legend, who died on August 5 aged 84, became “animated” once she put them on. Jobs’s signature black turtlenecks were made by Miyake. Streep and Kardashian have worn Miyake on red carpets. Rodricks made a career inspired by Miyake’s inventive micro-pleating—a technique in which cloth is cut first and then heat-pressed to create pleats, and then turned into the desired shape or size. Miyake’s origami-inspired micro-pleating was so popular in the west that even Zara and H&M began to ape it.

Miyake’s passing leaves a gaping void in western fashion that was so influenced by his eastern techniques, minimalist shapes and bold use of colour. But the loss feels a little more personal to India. Miyake travelled here extensively, and was so inspired by Indian handloom and its textures that he made a longstanding commitment to khadi. Miyake had visited and fallen for Gujarat and the Kutch belt, especially the men’s turbans there. He learnt about resist prints and dyes popular in the region. He worked with textile legends Asha Sarabhai and Martand ‘Mapu’ Singh in Ahmedabad. 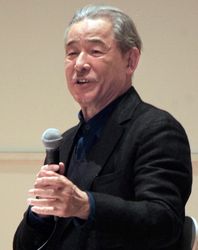 His clothing was high on technology, but organic in its design language. Its simplicity came from his Japanese roots, and like Kenzo Takada of ‘Kenzo’ and Rei Kawakubo of ‘Comme des Garcons’, he was instrumental in bridging the stubborn divide between eastern and western design languages.

It could also be said that he pioneered recycling looks with his 1998 collection—A-POC, or A Piece of Cloth—where a single thread was fed into an industrial knitting machine controlled by a computer programme. The machine would then create tube-like garments that could be cut and worn in a versatile manner. These tubes, much like our sari, were a one-size-fits-all.

Miyake took Indian handlooms to the east and the west. In 2018, he put together an exhibition on the khadi series that was available at HaaT, one of his concept brands. The series used Indian craftsmanship and traditional shapes to create contemporary, luxury clothing.

“India is a country that continues to cherish today the techniques, history, and culture of handcraft inherited from over the generations, all of which is manifested in its people’s simple, beautiful lifestyle and its textiles. Among the textiles, khadi is a type of cotton fabric that, despite the emergence of automated mass-production, is still spun and woven by hand in regions across India. The white of khadi is expressed in many different weaves, hand-woven one thread after another, and in between the weaves of its beautiful texture reveals India’s modern history and philosophy,” stated the press note that accompanied the HaaT collection. Miyake admitted to being massively influenced by Mapu, whose passing in 2017, in fact, inspired the exhibition the following year. He began collaborating with Mapu in the 1980s, and produced a series of clothing he referred to as “a dialogue with India”.

It would have been interesting to note his reaction to India’s polyester flags this year. But Miyake hated politics; his activism was only through his globally unifying work. He was seven years old when the US bombed Hiroshima. His mother would die from the radiation three years later. Miyake disclosed this in The New York Times only in 2009. He wrote that he unsuccessfully tried to put the past behind him, and preferred to think of creation and not destruction. “I gravitated toward the field of clothing design, partly because it is a creative format that is modern and optimistic,” he wrote.