Decoding the couture on KJo's couch

I love how celebrities don’t let us get bored of gawking at them. Just as soon as you are done being dazzled by their floor-sweeping red-carpet looks, they show up at airport departure terminals dressed in chic jackets and sneakers-of-the-moment. As soon as everyone had cottoned on to the ‘airport-look’, they began to hit the gym in sports bras, crop tops, athleisure sweatpants and Nike slides.

The newest fashion showcase is filmmaker Karan Johar’s recurring chat show, Koffee with Karan. While it has often held the fashion watcher’s gaze, I have rarely seen the stars up their game like they have in the last two weeks.

Just as soon as the first episode featuring Alia Bhatt and Ranveer Singh was out, fans were googling the designer of Alia’s gorgeous dress. Alia wore a pink ruched chiffon mini dress, with sexy cut-outs at the waist and rose petals for prints. The movie star’s stylist, Ami Patel, revealed the designer to be Magda Butrym, a hitherto unknown name in India’s fashion circles. Butrym is a young Polish label that marries romantic whimsy with contemporary fashion, and the playful and provocative frock ended up being the perfect dress for the soft-going-for-sassy Alia. No one could be bothered with all the juicy tidbits from her recent wedding to Ranbir Kapoor that the protegee had saved up for her mentor’s couch. Oh, the power of a sexy dress! 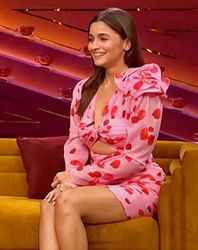 Next up were besties Sara Ali Khan and Janhvi Kapoor. Their close friendship was revelatory as they teased each other through the show, offering glimpses into their cheap holidays (two star kids quibbling over a Rs3,000-a-night hotel is so relatable), and shared men (Kartik Aaryan and the hopeful Vijay Deverakonda). Sara stayed faithful to black-and-white classic pieces with a Yves Saint Laurent mini dress with a white sailor’s bow on the decolletage, following the diaphanous David Koma gown she wore at an awards function a few weeks earlier. Janhvi played her muse Kim Kardashian to the hilt with her Alexandre Vauthier slinky slip dress showing off her ample curves. Vauthier, a young French couture designer, trained with icons Thierry Mugler and Jean Paul Gaultier before launching his own label.

I also love how chic Samantha Ruth Prabhu, India’s most-searched female star of the year, looked in the latest episode, colour-blocking her way to Bollywood’s favourite hot seat in a red jersey halter top and fuchsia trousers. She could not have found a better stylist than Bollywood favourite Lakshmi Lehr. Bollywood can hardly ignore the southern siren anymore after her extraordinary performance as an LTTE rebel in 2021’s Family Man 2 and this year’s blockbuster, Pushpa (and its super catchy earworm ‘Oo antava oo’).

Her co-guest, Akshay Kumar, on the other hand, looked like last night’s dinner. It is unfortunate that the talented and handsome actor refrains from making appearances with female actors his age. At 54, he would make such a lovely companion to the beautiful Madhuri Dixit (55) or the mesmeric Tabu (51), both of whom have had notable hits last year. It is not clear whether Akshay or the host himself insists on pairing him with stars decades younger than him.

One almost wishes the show was as avant-garde as its fashions. Of course, KJo is at his outré best, but only in his dress code. His avuncular questions to Sara about coming from a “broken home” date him. Thankfully, he spared calling his pet Janhvi a “love-child” or some such. Johar pussyfoots around Alia’s “liberal” upbringing by asking how she’s “adapting” to the Kapoor family. And makes us cringe by asking Ranveer to compare his wife, Deepika Padukone, with his current co-star, Alia.

Clothes are such a celebration of beauty, but to borrow from Kahlil Gibran, “yet they hide not the unbeautiful”.