WHEN I WAS writing my pregnancy and infant care book, I came across parents with different challenges. One couple had linguistic differences (Sindhi and Bengali) and worried if their differences had delayed speech in their baby. Their baby understood what they said but was never able to communicate back, even after he had turned three. Boys have been observed to speak later than girls of same age. But sex of the baby is not the only determinant to when a child will talk.

Some of the more common causes for speech delay include:

(i) Genetic predisposition: Babies from a family of late talkers may begin talking much later than peers. However, they are also capable of speaking on time if the environment surrounding them is conducive to speech.

(ii) Hearing impairment: An important cause for a real delay in speech is sub-optimal hearing. If there is any doubt about the child’s hearing, appropriate referral for hearing assessment is essential.

(iii) Damage to the brain: If the brain remains underdeveloped during the baby’s growth in utero, it could cause some problems with speech. Similarly, some babies can suffer from trauma of the brain when they make their way through the birth canal. Such injuries are rare but can affect speech, memory and lead to other related issues.

(v) Lack of motivation: If a baby is given things even before they are asked for, he will feel little need to express his desires, anger, frustration. This is why such children often vent by hitting or throwing tantrums.

(vi) Lack of a supportive environment:

•When babies receive much of their interaction from gadgets, it is usually one way. A child needs real people to interact with and practise his/her language skills. 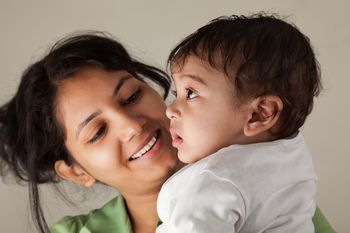 •Family members speaking in multiple languages can confuse the baby as to which language, sounds to pick up and mimic.

•An overworked parent may not have the energy or enthusiasm to keep up a lively banter with the baby all day.

•A major injury (mental or physical) or parents’ divorce or separation or any other traumatic event can cause a child to stammer, stutter or stop talking altogether.

*Avoid silences when doing chores. Pepper a session of folding clothes with remarks such as, “This is baby’s shirt”; “This is amma’s sari”.

*Begin with one language. Use mother tongue if it is common for everyone at home. If not, pick a neutral language such as English.

*Introduce a word in different ways to reinforce the concept. So a book can be a telephone book, storybook or a colouring book. It can be carried, read or coloured.

*Introduce an object by holding it next to your mouth. This way the baby’s attention is brought to the sound and movement made by the lips to achieve it. The baby also registers the facial expressions that go with a word. With time, the baby begins to connect the dots and understands that a particular word is uttered to express joy, another for fear and so on.

*Encourage the baby to talk. Don’t correct him/her but let him/her know what is the correct word or pronunciation. If your baby says ‘ook’ instead of book, say: “Yes, that is a book.”

NEXT ISSUE: Applying kohl to baby