My childhood friend with whom I had spent countless summers plucking mangoes called me recently to inform me that she was pregnant. The baby was due next summer.

“Is that good or bad?” I asked, wanting an insight into the enormous pressure of people expecting during the pandemic.

Just inconvenient, she said with a yawn. Surprised, I probed more.

Over the next few minutes, I learnt that while she had learnt to cope with the pandemic, she was struggling to cope with the dos and dont's coming her way in the light of her pregnancy. Come summer, when both her baby and mangoes were due, she was asked to steer clear of the latter.

She had been told that the intake of the juicy fruit would lead to loose stools in the baby due to the 'heat' produced by it. Could the pregnancy or pandemic be more ill-timed, she asked in frustration.

Most lactation experts insist that a breast-fed baby is not affected (though there can be exceptions) by what a mother eats. Since breast milk is assimilated from the mother’s blood and metabolites (products and intermediates of metabolism) circulating in it, what a mother eats is of no consequence to the baby. 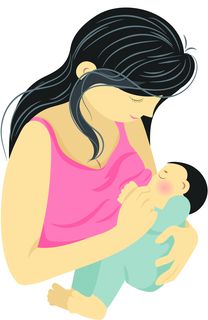 Lactation expert Kelly Bonyata drives home the point thus: “Mothers of formula-fed babies do not complain about what the cow has eaten if their babies are found gassy. In short, a mother’s heartburn, reflux, gas, etc, are hers alone and cannot be passed to the baby through her milk.”

But a baby might experience diarrhoea, vomiting and rashes as an allergic reaction to what the mother has eaten. My baby passed blood and mucous in her stools as an eight-month-old for the longest time. Tons of tests revealed nothing. It was much later that I came across studies that revealed that cow’s milk and its products are the only food types that have been conclusively linked to cause allergies in babies through breast milk. In short, my baby was reacting badly to the very milk I was being made to gulp down to produce enough milk for her.

While what a mother eats may not cause in the baby what it might in the mother (heartburn, gas, queasiness or acidity), a baby can still be allergic to what a mother has consumed in a sudden or large manner. This allergy can take the shape of colic, diarrhoea, rash, vomiting or blood and mucous in stools.

If there is a suspect food, omit it for a week or more to see if the baby is coping better. If you are adventurous and want to be doubly sure, eat the suspect food type again (after three or four weeks so that it is out of the baby’s system, too) to see if it produces the same set of symptoms in your child.