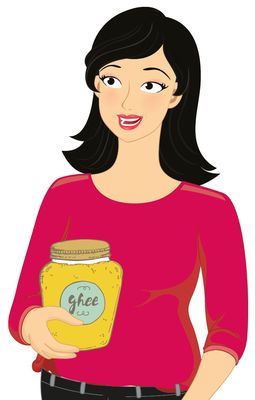 WHEN MY CHILD was born, my husband did not swoon like the faint-hearted man I had always suspected him to be. But he nearly did when he saw the amount of ghee (half a tumbler) I had to consume every meal thereafter. Is this even healthy, he squeaked to a formidable lineup of older women in my family. Ghee was essential for the new mother to regain her strength and turn her milk fatty, they insisted. In many homes, ghee is credited with imparting multiple goodness, but the question is if it is required in large quantities to produce fatty milk.

About 80 per cent lipids (fat) found in breast milk are long chain fatty acids that cannot be synthesised inside the breast. They have to be imported from the blood stream by drawing it from the mother’s diet or from her body stores.

Now if it is drawn from her stores, then obviously her body will take a beating if not immediately, then later. So, fat needs to be included in a new mother’s diet, especially if she has chosen to nurse. This can be done wisely though.

A lactating or pregnant woman needs to consume 50g of fat a day. Considering that some amount gets used in roasting and frying, she will need to include about four teaspoons a day. Unnecessary inclusion leads to weight gain, which interferes with lactation.

Good fats such as omega-3 fatty acids, especially DHA, are crucial for a child’s brain and eye development. So, it is a good idea to include them. Omega-3, found in flaxseeds, walnuts and many fish, is also good for the baby’s skin and in keeping postpartum blues away in the mother. It also helps deliver fat soluble vitamins (A,D,E,K) from the mother to the baby.

Apart from diet, fat present in mother’s milk is also dependent on the stage of lactation. Colostrum, for example, has less fat than mature milk, which comes in between 10-14 days after delivery.

Fat available to the baby from mother’s milk is also dependent on how empty the breast is. The emptier the breast (that is the more frequently the baby feeds), the more fat is available at the start of a feeding session.

This can be better understood by taking a look at how dal sediments behave in a saucepan full of rasam. While a clear broth will float at the top of the vessel, the sediments will have settled to the bottom. If a person wants to get to the dal, she will have to clear the broth first. If there is little rasam to begin with (if the saucepan is only half full like a half full breast), then it will be faster to get to the dal as there will be lesser amount of broth to clear.

A careful diet and frequent nursing will help assimilate fat in the mother’s milk and reach it successfully to the baby.

Next issue: What is breast crawl?